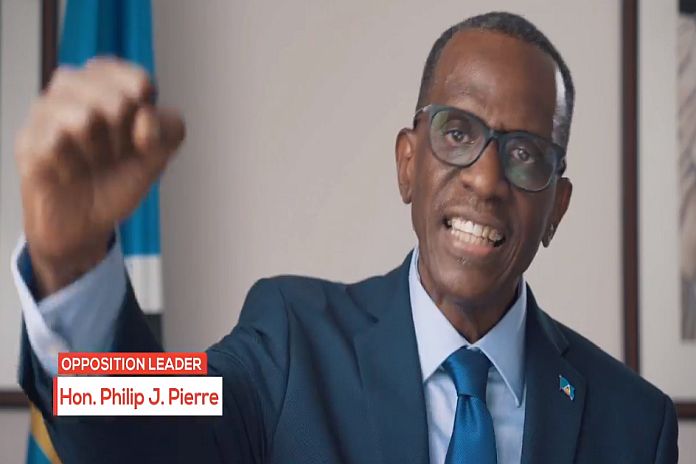 The following is an address to the Nation by leader of the opposition, Saint Lucia Labour Party (SLP) Philip J Pierre, on the occasion of the fourth anniversary of the 2016 general election.

In the practice of democracy, citizens choose governments based on promises made and expect their lives will not be worse.

Four years ago, on June 6, 2016, the majority of Saint Lucians chose a new government on a deceptive promise of “five to stay alive”. Never did we realize that the “five to stay alive” was at the expense of the remaining ninety-five of us. The time is fast approaching for the people of Saint Lucia to turn their backs on a government that has not worked for the majority. The last four years have been the most shameful, disappointing, and in many ways damaging period of governance in our country.

My fellow Saint Lucians, as we enter the fifth year of this United Workers Party (UWP) government — the year in which its mandate ends and we return to the ballot box, it is incumbent upon me to remind you how and why life got worse for Saint Lucians under this government and that; I lay in broad terms the plans of a future labour government.

This UWP government has been one of misplaced priorities; a government that has failed to put the people of Saint Lucia first and has paid more attention to the ambitions of friends, family, and foreigners. It frittered away the last four years, frolicking with horses, flirting with foreign consultants, making fresh starts here and there, while the country got nowhere, emptying the treasury, raiding the National Insurance Corporation (NIC), globetrotting the world uselessly at taxpayers’ expense, ignoring the poor and victimising the powerless.

It astonishingly poured enormous energy and financial support into a dubious horseracing track on 1,000 acres of prime agricultural land at Beausejour Vieux Fort which is literally gifted at $1 per acre into the gleeful hands of a non-national. At the same time, it neglected and stubbornly refused to complete the St Jude hospital on the false premise that the complex of buildings began by a previous UWP administration and continued by the last SLP government, was below standard and unfit for purpose. To this day, there has not been any incontrovertible evidence provided to show the St Jude buildings could not have been utilized as a hospital.

Nevertheless, the government has proceeded against all sound professional technical advice to demolish two buildings and make a fresh start at St Jude, with the erection of a new structure, having to borrow more millions to do so, instead of finishing the nearly-completed buildings.

It took the COVID-19 pandemic to force the government to open the Owen King European Union (OKEU) hospital after four years of indecision and cavorting with foreign entities.

This is a government that lacks, empathy, respect, and love for the people. For its selfish motives, it has extended the COVID-19 ‘State of Emergency’ by another four months, against the wishes of a stressed people, and in contradiction to its policy of opening up Saint Lucia to the world. In the meantime, it has to date failed to provide economic relief to the thousands of ordinary Saint Lucians, small businesses — our youth, the elderly and vulnerable, the disabled, the unemployed mothers, our farmers, our fisher-folk and the workers of this country whose economic livelihood has been crushed by the COVID-19 virus.

The prime minister insists on cutting 50 percent of the salaries of public servants while he finds money for everything else and yet he questions why they won’t believe his reasons for the cut.

Last week, the government was forced to withdraw an oppressive piece of tourism legislation which would have been particularly disadvantageous for small property owners. Now it has imposed registration requirements for citizens earning their livelihoods in occupations like charcoal making, with a fine of $5,000 and or six months imprisonment for failure to comply. A ploy to collect more revenue instead of the promised elimination of Value Added Vat (VAT).

This is a government, led by a prime minister who does not appreciate and has no respect and regard for our cultural heritage, our patrimony, and who continues to punish the Saint Lucia National Trust; an organization established under the law to protect our national heritage. Just two weeks ago, he declared that economics does not have a conscience but colonization had — because he does not understand that colonization was a very deliberate system of exploitation, subjugation, and enslavement of our people.

This is a government that remains a danger to the future of our democracy, as it ignores our constitutional and parliamentary norms and procedures; arrogantly break an agreement signed by the attorney general with the National Trust while it passes laws in a parliament without a deputy speaker, under the cloak of darkness without prior consultation and discussion with the people most likely to be affected.

This is a prime minister who, by his ineptitude and his continuously shameless disregard for the truth, keeps proving, over and over again, that the Saint Lucia Labour Party was totally justified one year ago when it tabled a motion of no confidence in him— in the House of Assembly.

The government has failed to deliver on almost everything it promised four years ago. Where are the new hotels? Now in this fifth year, ministers are rushing here and there, building roads and bridges, demolishing history and promising modernity, all in a mad frenzy to make you forget those last four wasted years.

The verdict is clear; this UWP government has been nothing else but an abysmal failure. The prime minister acknowledged this himself, when in his 4th-anniversary statement last Saturday, all he could highlight as successes, were the shifting of Jazz, better independence festivities, and a bigger Carnival.

The UWP government has not been working for you. Now, you the people, their employers, will have to do the right thing and— have them fired.

The Saint Lucia Labour Party is aware that the task of rebuilding Saint Lucia will not be easy. It will require great sacrifice and hard work, to extricate Saint Lucia out of the hole in which the UWP government has dropped us. We also have to take into account that the COVID-19 pandemic has changed the way that we have to plan and live our lives.

The Saint Lucia Labour Party is equal and ready for the challenge. A future labour party government is committed to reforming the economy of Saint Lucia so that the people are at the centre of the country’s development.

COVID-19 brought home this necessity quite clearly. We will structure an economy that will harness the digital revolution that COVID-19 has now accelerated worldwide. It will comprise of a strong youth component built in collaboration with the Youth.  The Youth Economy will cater for the distinctive interests of young people and will provide them with special incentives, finance, training, and marketing access allowing the development and promotion of their talents to ensure that we create the next generation of Saint Lucian entrepreneurs.

A newly structured economy will be fashioned with, a vibrant orange sector propelled by the creative and cultural energies of our people. The tourism industry will be shaped mainly around our history, culture, patrimony, and beauty of our country and people and with balance and equity. Small proprietors will be accorded the same importance and incentives as the large foreign hoteliers and we will ensure that every local contributor to the functioning of the industry receives the returns and support they merit.

The agricultural sector will be geared towards the food security of the nation and the successful export of traditional and new products. The time has come for Saint Lucia to become involved in the business of cannabis production for economic, medical, and other uses. There will be new means to create opportunities for our agri-business producers.

There will be a complete reform of the Citizen by Investment (CBI) programme to provide accountability, transparency, and the responsible use of its funds. We will review all major capital projects to determine which ones can be a priority in these extraordinary times of COVID-19.

A restructured economy will necessitate a reformed education system that provides for the requisite trained human resources. It will treat education as a right and not a commercial activity, in which, the Sir Arthur Lewis Community College is expected to return a profit at the expense of providing an education for all who need it. Our objective is to have a University graduate or trained individual in every Saint Lucia household within a reasonable time.

The Saint Lucia Labour Party is committed to the continuation of the constitutional reform process. Our governance system must be transformed so that the people become more involved in the development and governance of the country.

Our governance system will be more inclusive and will ensure that corruption is discouraged and punished when exposed. Our judicial system will be adequately resourced to ensure justice and equality for all.

Where once more, transparency and honesty, and not corruption, are the hallmarks of the business of government, where once more, kindness and selflessness and the “Koude Men” ethos of our fore-parents are the guiding principles of our country.

The Saint Lucia Labour Party is ready to transform Saint Lucia from the ruins brought upon it by the oppressive, deceitful, self-serving and insensitive hands of the UWP.

We will improve the wellbeing of our people. There is another way of managing our country and my party provides a far better way. With the SLP, people come first. You can place your trust in me and the Saint Lucia Labour Party.

I assure you it will be well placed. We are the party of positive change, for all the people, not just a few. We will work with you the people for the benefit of all.

The government has abused the privilege granted to them by the people of Saint Lucia. They have forgotten that — what the people gave, the people can take away.

This is not the time for unnecessary distractions. I call upon all men and women to join the movement for change. As Martin Luther King says “the time is always right to do what is right.”

Shake off the dust: Unite for progress – Part 2