The following is a continuation of a three-part series of an interview conducted with David Jordan on the economic paralysis that confronts Saint Lucia, in the era of COVID-19, the International Monetary Fund (IMF) and Saint Lucia’s 2020/2021 estimates of revenue and expenditure for 2020/2021.

Q:  On the circular flow of income in Saint Lucia’s economy; what’s your economic theory?

A:  It is inhumane to run away from the economic theory which ought to be utilized alongside public sector management. My thinking is that not even the uninformed will adopt this as a first option.

You just have to realise and not imagine that Saint Lucia is experiencing a circular flow of income in the country’s economy as a result of the novel coronavirus (COVID-19) crisis, which has impacted the economy and the rest of the world in an unprecedented manner. The economy comprise of the private sector and public sector – where all are subjected to components of consumption, investment and savings.

Therefore, the public sector wage bill estimated at $EC50 million-plus; and the consumption pattern where the ratio is .75 (of consumption) facilitates a multiplier effect approximately four times; the overall accumulated multiplier magnitude is (37.5 x 4) EC$150 million. What would this mean if public service salary is cut by 50 percent cash and 50 percent bonds?

This means you lower the impact of the multiplier effect in the circular flow of money in the economy and the volume of consumption and level of disposable income to consume goods and services. In effect, (as proposed) the minister of finance is reducing the purchasing power in the economy to purchase goods and services from the distributive trades sector ( the only performing sector in the GDP, currently, outside of tourism pre-COVID19 to facilitate a modicum of ‘sustainability’.

Don’t forget the economy experienced a sharp decline from day one (which is quite astonishing), followed by a contraction due to the loss of income in the private sector, particularly the tourism sector (again), due to containment and/or confinement. The impact will be realizing further from the calculated cost of the shut-down and business that will not return post-COVID-19.

As I referenced earlier, this will impact the distributive trades sector – relevant to the GDP – and you can virtually bring the national economy to ‘economic instability’ or even collapse with the adoption of such policy measures. Why?

The circular flow of income will become smaller in comparison to its original size. The correct action calls for the adoption of positive complementary policies, to enhance the sector to recuperate but not necessarily as proposed in a stimulus action plan where the finance minister makes mention of – a barrel programme. This may “sound sweet to the political ears and mouth but possess sour economic repercussions.”  This would negatively impact the distribution trade sector, particularly governed by the local private sector inclusive of small community shops as well as larger private sector operations.

From a wider viewpoint, both sides of the Atlantic are experiencing challenges to the re-opening of their productive sectors in respective economies. International trade is at a halt and the re-opening is being contemplated on a ‘best-scheduled re-opening’. Coupled with this, the World Bank has already predicted a reduction of remittances from developed economies to developing countries. It is more appropriate to adopt policies and dig-deep with greater innovation for the national private sector to recover. Thus, efforts to encourage remittances may be a more appropriate policy strategy rather than a barrel programme so early in the year.

Moreover, the argument is such that the richer ones ‘amongst us’ will benefit, rather than the poorer and more vulnerable of our society, in the absence of a social conscience. A measured approach to a Social Safety Net needs to be reinforced to begin the process of building back the local economy and not the perpetuation of dependency. We can also examine what impact this has on the economy and on other elements dealing with the circular flow of income – investment as well as savings which registered declines both in the private and public sector before 2020.

In contrast to the minister of finance, leader of the opposition Philip Pierre adopts a more humane approach in dealing with a policy solution that is imaginative and more people-oriented, with less negative and controversial impact on the national economy.

Remember, the bitter pill is 50 percent cash and 50 percent bonds and the relationship with the International Monetary Fund (IMF). Either is short term and seemingly a gamble to the uncertainty of COVID-19.

A:  Certainly, we need to examine national productivity as depicted by the data presented in the IMF report in light of promoting a stimulus package. The expectation is  to ascertain the effectiveness of a stimulus package rather than adopt a reactionary model fashioned on abstract leadership and economic theory, socio-economic conscience and/or lack thereof.

We also need to examine which model best facilitates productive sectors in the economy and the trend of credit facilitation by the financial institutions. Likewise, the need to embark on measures targeted at selected sectors in the economy amenable to growth. The Saint Lucian economy is faced with unique characters and structural weaknesses as detailed by the National Productivity Council Report. 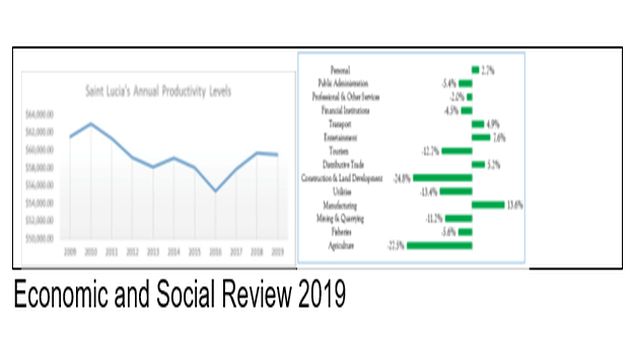 On the issue of financial institutions and the role of banks vs the role of Credit Unions Cooperatives, lets examining the data as outlined in the IMF report.

Banks have enjoyed a level of liquidity and their performance reflects a lesser amount of loan disbursements for sectoral development characterized as risk-averse. The Credit Union Cooperatives, on the other hand, has been “overheating” before COVID-19. They have generally demonstrated a greater willingness to lend with warrant restraint. But this has consequences as depicted by the relevant data in the IMF report.

That’s a bullet to be bitten, but this still needs prudent fiduciary and conservative public finance management while embarking on timely expansionary interventions and adoption of complementary financial policy and strategies.

Saint Lucia, similar to the rest of the Eastern Caribbean Currency Union (ECCU) is faced with the imminent departure of foreign banks, the effects of de-risking on national/indigenous banks in an ever-changing environment.

Q:  The government of Saint Lucia has accepted the Rapid Credit Facility from the IMF. What is your perspective?

A:  While Saint Lucia and several governments throughout the developing world accepted the IMF – Rapid Credit Facility (RCF), Antigua and Barbuda stands – resolute amidst COVID-19.

The peril to accept comes with the temptation to resist the use for purposes other than the RFC dictates. However, based on the 2020/2021 estimates of revenue and expenditure, that circumstance seems apparent.

Let me direct your attention to the IMF report:

“ A drop in fiscal revenues, combined with additional direct health and social expenditures will temporarily increase the fiscal deficit and financing needs.  The IMF support has offered help to cover some of these needs and allow the governments to ease the impact on the population, such as upgrading public health facilities and providing social assistance to the vulnerable and adversely affected sectors”.

Saint Lucia, Dominica, St Vincent and the Grenadines, Grenada “have responded to the pandemic by swiftly implementing containment measures, allocating scarce budgetary resources to critical health care spending, and introducing income support to the most affected sectors and households. Protection of the financial system will help cushion the economic impact of the pandemic.

Measures have also been taken by the Eastern Caribbean Central Bank (ECCB) to facilitate the provision of credit and safeguard financial stability. Further, the ECCB offered a two percent concessionary lending facility, for loans to productive sectors in the ECCU. The approach has been classified as time responsive and sensitive to productive sector focus, with a stated duration and which too will enable full resilience”

The re-basing of Saint Lucia’s GDP thus fulfills a requirement.

“The authorities are expected to maintain a regional debt target of 60 percent of GDP by 2030 which comprises of  adjustment measures to rebuilding policy space.  Looking forward, the authorities are also committed to implementing policies that support durable economic growth and poverty reduction within a balanced development strategy that includes comprehensive measures to boost resilience to natural disasters. “

To be continued … Part 3 (Financial management)