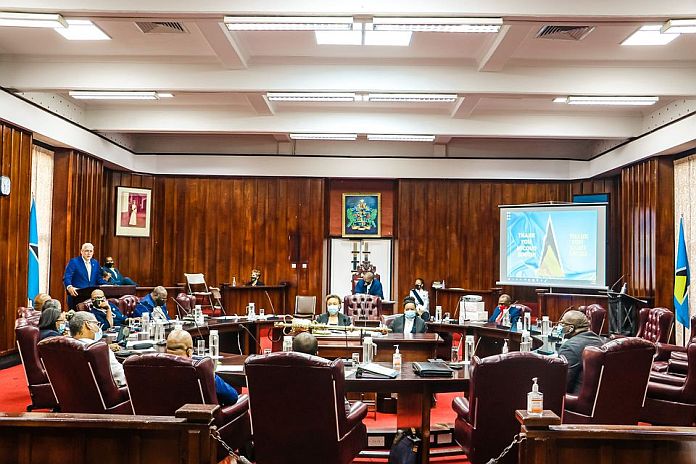 TORONTO, Canada – It is arbitrary for prime minister Allen Chastanet to insist that the State of Emergency (SOE) to October 16, will not hinder the nation’s upcoming general election. On the other hand, that’s the same prime minister who said in the comfort of a familiar radio station, that he would not call an election during a state of emergency.

Such unpredictability of a twisted tongue is incremental in the value of one or more, of a set of variables from the truth, that the SOE, COVID-19, vaccine diplomacy and general elections are intertwined.

Attempting to legitimize the current impractical situation of the government of Saint Lucia, prime minister Chastanet rationalized his insufficiency, stating,“ how can a state of emergency stop the general election?”

The prime minister, however, missed several technical and strategic aspects to his speculative utterances, including, the use of security, technology, COVID-19 and SOE enforcement, modern election strategy and the application of governance apparatus, which gives an advantage to the ruling party.

“This is the highest daily increase in COVID-19 cases noted for the last 12 weeks. The majority of the cases (63%) are from the southwestern belt of the island.”

According to the Government Information Service (GIS) May 7, 2021, reporting on prime minister Chastanet, address in the House of Assembly, on May 4, said:

“One of the critical decisions that will guide the decision when we will have elections is when we believe that we can have an election in the safest way possible. But I have said repeatedly that we will not, in any way, go contrary to the Constitution of Saint Lucia.”

The report continued with the prime minsters attempted understanding of what the constitution inscribes; for example, the GIS report stated:

“According to the Constitution of Saint Lucia, the SOE may be revoked during the five months, at the discretion of the Governor-General that could allow for a general election.”

It is commonly known, what the prime minister says, for the most part, is irrelevant to the affirmative understanding of astute minds and the practical understanding of facts and truth. And secondly, in the interpretation of the laws and the Constitution of Saint Lucia, the prime minister is not the source for such specialized knowledge, not even to recite in English or Creole.

In fact, a layman/woman in constitution park [now a restrictive area when the United Workers Party (UWP) parliament is in session] would be more appropriate, in the intricacy of knowledge.

“Government also intends to liaise with the opposition on COVID-19 protocols that will govern the national event.” Prime minister Chastanet continued: “It is certainly the government’s intention to make sure that we work with members on the opposite side, arbitrary independents to ensure that we are clear on what the protocols will be and that both sides will fulfil their obligations and commitments in adhering to them.”

Again, a play on words and intent on those not adapt to the assumptive selling technique,  or presumptive close [ intentionally assumes that the customer has already said yes to the sale].

Beyond alternative reality, “the truth is what you believe the truth to be” no historical and assumptive statement gives credit to the prime ministers effective consultation with the “opposition” – “the opposite side” and/or “ NGO’s, domestic business interest [outside Friends, Family and Foreigners] pubic and private organisations on the island, to substantive resolution.

However, prime minister Chastanet is infamous as ascribed: “I don’t listen, I let the jackasses bray,” and “I don’t have to listen to every dog that barks,” etc., etc.”