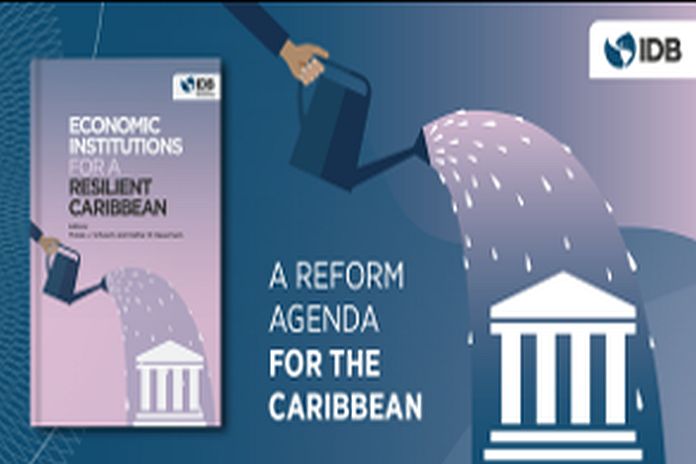 WASHINGTON, USA – To build resilience against external shocks and recover from the COVID-19 pandemic, Caribbean countries must advance key fiscal and financial reforms that range from stronger tax and pensions systems to improved debt and financial management, a new study by the Inter-American Development Bank (IDB) says.

The book entitled Economic Institutions for a Resilient Caribbean recommends that the region strengthens its institutions to promote economic growth in line with a sustainable fiscal management, effective monetary policy, and resilient financial systems. The analysis lays out specific reform agendas for The Bahamas, Barbados, Guyana, Jamaica, Suriname, and Trinidad and Tobago, which are borrowing member countries of the IDB.

“As Caribbean governments pivot towards smart and resilient investments, strong economic institutions are needed to ensure public spending benefits all citizens. In addition to recommendations for improving fiscal management, the book also proposes important monetary and financial system reforms to ensure Caribbean institutions and people are prepared for the future,” said Therese Turner-Jones, general manager of the Country Department Caribbean Group at the IDB.

“Stronger and better-equipped institutions constitute a formula for success, and sound economic institutions are a prerequisite for economic development and prosperity,” said Moisés J. Schwartz, manager of the IDB’s Institutions for Development Department, and one of the editors of the book. “The reforms needed in Caribbean countries should not be underestimated or postponed.”

The book said that stronger institutions will allow governments in the region to better plan and respond to such economic challenges, by promoting improved fiscal and monetary discipline. Such actions can help reduce the risk of debt and financial crises.

“Countries that have engaged in institutional development have been shown to be better equipped to confront economic shocks, such as the coronavirus pandemic, be more resilient in responding to them, and have better prospects to recover more rapidly,” said Diether W. Beuermann, Economics Lead Specialist for the IDB’s Caribbean Department and one of the
editors of the book.

A fiscal management reform agenda for the Caribbean

The book highlights the following reform opportunities for the Caribbean to promote fiscal sustainability:

Simplify taxes and reduce incentives: Caribbean countries have a generally low tax burden but high statutory tax rates and an array of exemptions, incentives, deductions, allowances, and discretionary waivers. The region should simplify its tax code and reduce incentives to eliminate economic distortions.

Improve fiscal rules: The region could benefit from adopting fiscal rules that promote fiscal sustainability and have a clear medium-term target for the ratio of public debt to GDP. For resource-rich countries, the study recommends the rule to focus on expenditure and that spending does not exceed the country’s macroeconomic and public financial management absorption capacity. The study also recommends that these countries create independent fiscal councils.

Build sustainable pension systems: The population in the region is aging quickly and governments are under increasing pressure to address the financial sustainability of their
pension programs and the significant challenges in the adequacy of their benefits and population coverage. Pension reform needs to be placed at the top of the reform agenda as the window of opportunity for appropriate and comprehensive reform is closing.

A reform agenda for monetary institutions and sound financial systems

Promote central bank independence: Ensuring technical and political independence of central banks, as well as introducing greater transparency in their operations, should rank high on the agendas of policymakers in the region.

Strengthen financial regulation: Given the importance of banks in the region’s financial systems, it is critical to ensure that these institutions are prepared to deal with severe and
unforeseen shocks to their financing and trading activities. The region should implement financial regulatory reforms aimed at introducing macroprudential standards that help banks keep lending during economic downturns and prevent their lending from overheating the economy during good times. The study recommends reforms to foster greater competition and financial inclusion, including the establishment of credit registries and bureaus to facilitate more effective sharing of credit performance records, strengthened property rights and insolvency procedures, and improved financial technologies with adequate safeguards.