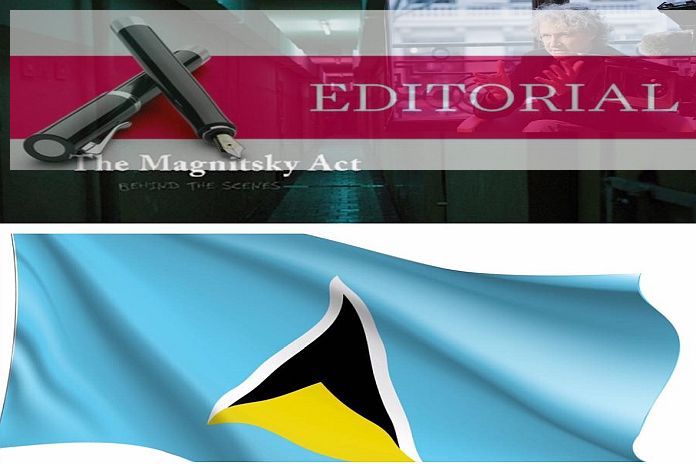 The UK House of Commons passage of Magnitsky-style sanctions targeting overseas officials accused of human rights abuses and involvement crime, targeting China, Britain’s foreign secretary Dominic Raab said, “I am not going to pre-empt or pre-judge further designations now. But we’re already working on what the next wave might be”.

Raab questioned whether China can be trusted to live up to international obligations after its move to introduce a new security law for Hong Kong, which London says contravenes the historical agreement handing over the territory to Beijing.

In response to ongoing concerns, policy and decision-makers to the reality that is undeniable a failure of epic proportion becoming ungovernable, the question was asked by Allen Chastanet in the 2016 general elections: “Has Kenny Anthony made Saint Lucia safer? He didn’t, but we will. He didn’t, but I will … this is the most important decision to consider in the upcoming campaign.”

According to the prime minister “I honestly don’t know” status of IMPACS investigation said:  “In terms of where the case is at, the details of the case, I honestly don’t know. All I know is that the DPP’s office is been moving forward, that my understanding of what he is trying to do is to confirm whether in fact there is sufficient evidence to take this thing to trial.”

Based on trends and expectant happens to the detriment of all concerned, whether it is on US-Caribbean Strategic Engagement Act’s; Foreign Corrupt Practices Act (FCPA); IMPACS investigation and aspects of the IMPACS report; ongoing  Leahy Law restrictions, and the introduction in the US Senate, the “Cut Profits to the Cuban Regime Act”, which, if it is adopted, will penalise any government, worldwide, that contracts with the Cuban government for the provision of medical personnel.

These including, Caribbean governments that have such contracts with Cuba, they all stand to be targeted – Caribbean News Global (CNG) finds it instructive to republish [with approval] – St Lucia and the Global Magnitsky Act – originally published November 2018.

Despite the commitment to a constitutional democracy, when strong personalities foster elitism that cultivate the abuse of power, privacy and secret agreements, coupled with human rights abuses and blatant corruption, more collateral damage can be expected to the political and economic well-being of Saint Lucia through the Global Magnitsky Act (GMA), which allows the US government to sanction corrupt government officials implicated in human rights abuses anywhere in the world.

In furtherance of human rights and as global leaders, the US and Canada have acted swiftly to condemn and apply global instruments [legislation and sanctions] on individuals and countries engaged in human rights offences, freezing their assets, banning them from entering and/or doing business in the corresponding countries.

The 2010/2011 Operation Restore Confidence (ORC) led by the Royal Saint Lucia Police Force (RSLPF) was conceived by the then United Workers Party (UWP) government to contain a violent crime wave but, following the operation, members of the RSLPF were accused of a number of extrajudicial killings that, in the absence of any official action to hold those responsible to account, eventually led to the US sanctions under federal law [the Leahy Law ] that prohibits foreign security forces credibly accused of human rights abuses from receiving US-sponsored assistance.

Nevertheless, the Saint Lucia government in general and local law enforcement, in particular, do not seem to have learned much in relation to the potential consequences of bad actions.

A recent episode, when a senior police officer’s ex-wife was shot and killed at her residence on November 29, has renewed attention on extrajudicial killings and there has been an upsurge in letters and communications to political operatives, referencing ORC, coupled with theories and interviews suggesting of some type of criminal conspiracy, guilt or innocence.

However, lack of credibility, inconsistency and intellectual dishonesty that have arisen from official communications or otherwise “willful blindness” is not surprising in a meager attempt at damage control in the spin cycle of political motivations and the recognition of injustice [bad law] of epic proportions.

If anything, this speaks to a measure of confusion or amateurism that doesn’t inspire confidence in the government of Saint Lucia and law enforcement agencies to carry out successful undertakings.

It’s Murphy’s Law: What can go wrong, will go wrong; and like a deer in the headlights, they are paralysed and don’t know what to do.

In discussing the rivalries at play and what unsolved crime has meant for Saint Lucia, the degradation it has brought to society and evidence of a broken justice system, socio-economic elitism, corruption and sanctions by the so-called Leahy Law, “The Justice for Roger” campaign blog, described the island as a “gangsters’ paradise” and asked if tourists should boycott Saint Lucia.

Chilling as it sounds, this is precisely what does not need to happen, but the problem must be faced and eliminated, with a high degree of urgency. However, authorities remain “willfully” deaf, blind and dumb, with nary a meaningful word spoken about the spiraling crime wave, homicides, unsolved murders, the Bordelais Correctional Facility and the tinderbox of remand prisoners.

Given that imperative, the use of statecraft sometimes called “the art of governing”, requires political experience, diplomacy and leadership skills, and reliance on economic tools [sanctions/economic pressure] to advance foreign policy goals.

The point of reference here enhance the theory that every policy presents a tradeoff between the laws of economic and political gravity to act effectively now and in the future. There is also the apparatus of free trade, open markets and varying incentives to wield economic power with short-term and long-term consequences.

As to whether the government understands the magnitude of the island’s global credibility, the merits of constitutional democracy, existential vulnerability and the importance for a socio-economic agenda is not without consequence to the functionally misguided.

The magnitude of the challenge facing Saint Lucia is not only that of legality, law and order but fiscal and moral imperatives.

The art of governance must have meaning in doing better for the people, pursuing efficiency in government, reinventing government service delivery, a smarter development program that safeguards vital public services and programs while making life more affordable for individuals, families and businesses.

It does not help that, day-by-day, the government of Saint Lucia looks more likely to jeopardize a commitment to norms and rules, and to protect rights and freedoms; meanwhile advancing a wish-list of entitlements, preferred infrastructure projects with conspicuous conflicts of interest and disregard for the constitution.

Equally, the quality of foreign investments is more synonymous with unscrupulous characters and the willingness to fall in line with racketeering, corruption, deception and peddling lies, taking advantage of the willful corruption of the island.

The primary problem is that the government of Saint Lucia is far removed from putting its fiscal house in order, together with the legal system, law enforcement and an intelligence apparatus to a level of competence.

Besides that irony is the abysmal performance on the international and domestic level. It, therefore, remains to be seen what corrective action/changes will influence the potential to inspire practices of extraordinary energy and dynamism for a reversal of fortune.

These are dark days

The abuse of power invites reciprocal abuses and should never be used as an end in themselves to the mentality of authoritarian rule.

The ongoing non-resolution of ORC that frequently comes off as leadership and governance ineptitude, the application of the Leahy Law has Saint Lucia in social and economic jeopardy.

As a matter of caution, preventing further escalation of the Kimberly Williams-De Leon killing as another cold-case, or murder s/he wrote story, is most advisable.

In short, it is indispensable to have a legal system that is stable, independent and proficient in which the citizens have confidence in, and above all respected, which brings to mind the importance of the Caribbean Court of Justice (CCJ).

Having accepted that reality, to abandon facts is to abandon freedom; as well as a leader who lies constantly can distort a nation’s perception of reality.

Abraham Lincoln explained in this harrowing passage: “Human nature will not change. In any future great national trial, compared with the men of this, we shall have as weak, and as strong; as silly and as wise; as bad and good. Let us, therefore, study the incidents of this, as philosophy to learn wisdom from, and none of them as wrongs to be revenged.”

Nevertheless, should nothing else change in the continuance of bad politicians making bad laws, foreign policy, social and economic decisions, there is a reliable indicator that the future of Saint Lucia is at risk under the Global Magnitsky Act, which targets human rights abusers and corrupt actors around the world.

COVID-19 pandemic elections in the Caribbean