The microworld of the family for a Chastanet is not that of a Compton, but then, prime minister Allen Chastanet, not surprisingly, did not know that.

For some families, respect and support for each member is far more important, if only publicly, than personal gain and recognition. What would have been normal for Chastanet was certainly not for celebrity chef Nina Compton; daughter of the late Sir John George Melvin Compton, lifetime leader of the United Workers Party (UWP), and Lady Janice Compton.

The allure of title and the opportunity to enjoy special privileges was never going to allow Nina Compton to ignore Chastanet’s shoddy treatment of her sister Jeannine Compton-Antoine.

Therefore, when the offer of Goodwill ambassador was made to Nina Compton by the Chastanet-led administration she had no choice, but to turn it down, in a show of solidarity with her sister and family. And for those who may want to argue that the title of Goodwill ambassador is to assist the country and therefore more important than the individual circumstances of her sister; this is a specious argument.

It is true that individual interest should take second place to the country’s interest, but what is also true is that strong community and by extension, strong countries are built from the foundation of strong families.

Similarly, until a leader of a country is able to recognize, respect and promote the structural strength and integrity of the family, he/she cannot expect to build a strong country. And, therefore, the prime minister of Saint Lucia should not be encouraged, in any way, to undermine the strength of any family.

There is a destructive pattern of behavior of prime minister Chastanet which is now inescapable. And consequently, it is the case with those who support his behavior, either from fear and/or favor leading to a common destructive element present in the character of his rabid supporters. They wax lyrical in support and in the case of the “Bermudian citizen”, who continues to muscle in on the overrated mid-day talk show/journalist attacking everything Saint Lucian.

It is no wonder he beacons, truly a foreigner and enemy of the people that coexist in our Saint Lucia, today, where everything is about “mon-nee”, mercenary writers are falling from the stars, detrimental of a meteoroid/comet, unable to bring the truth to light. And so, the Chastanet-led administration recent act, a still-born attempt, to cause division in the Compton family has cheerfully failed.

As a reminder, Chastanet’s shoddy treatment – a usual not-with-it prime minister having vindictively denied Jeannine Compton-Antoine the right to a job as director of the Saint Lucia National Trust (SLNT) that she is qualified to perform, (in contrast to the prime minister so-called double degree, whatever that means), on the other hand, turns to her sister Nina Compton, and offers her a position of Goodwill ambassador for Saint Lucia, in the hope of leveraging her culinary international status, is hideous.

Nina Compton’s response could easily have been answered in two words best suitable for private conversation; instead, penned a royal rebuffed, classic of a Goodwill ambassador in her own rights.

Nina Compton did the right thing, which her late father Sir John would have supported. And inevitable, with or without “title” Nina Compton, I am sure, will continue to proudly promote Saint Lucia wherever she operates.

By her action, she has demonstrated solidarity with her family, at a time when the UWP administration continues to shamelessly, leverage the political capital of her father’s name at every turn; and at the same time mistreat the family.

What type of person does that? So let’s see how many of the ingrates and destructive elements will rally around the protagonist in this era of Saint Lucia’s destruction. I am awaiting their usual unpatriotic, pitiful defense.

Below is the well-distributed letter from Nina Compton to informed the government of Saint Lucia that: “ I must decline your invitation to serve as Goodwill ambassador.” 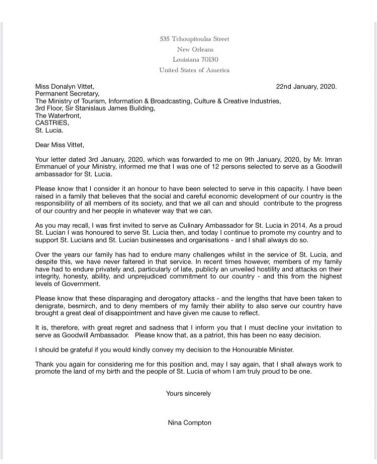