A week ago, the plain-spoken environmental activist Gary Aboud, 60, slapped on his cap and denim jacket, secretly boarded a small Trinidadian boat, and did the unthinkable.

Unlike the tens of thousands of refugees who dared the choppy crossing and now eke out a living here, or in neighbouring Guyana and wherever they can, he headed through the white-capped sea, in the opposite direction, for their troubled homeland of Venezuela, its mainland mountains silhouetted in the far distance on a clear, sunny day.

On August 13 last, media house Crónica Uno covered a protest by desperate oil workers struggling to survive on salaries that have become as worthless as the barrows of bolivars they are paid in. Shortages and inflation have soared in a once-great nation that still holds the world’s largest proven oil reserves but now ironically only operates a few refineries, following decades of widespread neglect and mismanagement, and the tightening of sanctions by the United States to force out the long-lasting populist Socialist administration that is supported by the military.

Even as fledgeling Guyana prepares to significantly escalate its yields a year after American behemoth ExxonMobil launched production, Venezuela’s oil output has plummeted from 2.3 million barrels per day just 12 years ago to less than 400,000 in July, with further declines predicted given the COVID-19 induced oil price collapse, and limited domestic storage.

Just days earlier, there was an unexplained major oil spill believed to be from the El Palito refinery, that spread in a viscous black wave along the Falcón coast, staining the shores of the Morrocoy national park famed for pristine beaches and mangrove wetlands. A national expert later estimated that the affected area would take over 50 years to fully recover. Worried employees from the sanctions-crippled Petróleos de Venezuela, or PDVSA, the State-owned oil and natural gas company who spoke to Crónica Uno, warned of an imminent ecological disaster that would also affect the Gulf of Paria, the Caribbean Sea and the Atlantic Ocean.

“It is a storage vessel that is at full capacity of its tanks and has a degree of deterioration due to lack of maintenance. It already has lateral heel-grade push-ups – tilt – considerable for the force of the wind and the lacing of the cargo, which causes the ship to be losing stability and risks collapsing,” explained Isidro Villegas, an oilman from the city of Puerto La Cruz.

The native of Guiria, the capital of Valdez Municipality in Sucre State, knew he and colleagues could be in serious trouble for speaking out, as the beleaguered Nicolas Maduro-government has gone after critics and perceived enemies of the State. An investigation by the United Nations recently concluded the president and top ministers are responsible for probable crimes against humanity, including extrajudicial killings, enforced disappearances, arbitrary detentions, and the systematic use of torture.

“Not that I’m… (un)afraid of reprisals, but my conscience doesn’t allow me to be silent and complicit in what could be one of the biggest ecological disasters in the area,” Villegas admitted. His comments were in the translated report, shared on the Facebook page of Fishermen and Friends of the Sea (FFOS), the watchdog group headed by Aboud, the corporate secretary. A strident member of the small but powerful Syrian Lebanese-descended private sector community in Trinidad and Tobago he is a successful city businessman with a passion for environmental conservation much like our ever-vigilant Annette Arjoon-Martins.

Tired of repeatedly writing letters, sounding frequent media alarms and waiting forever on foreign and government officials to move quickly, Aboud decided to see for himself as a citizen journalist, whether the claims by the PDVSA offshore executive director Pedro Figuera, that the vessel was in a “satisfactory state” and “complied with environmental and operational standards,” were indeed true.

A slight, wiry man, and a veteran campaigner, Aboud ended up stunned and horrified by what he found abandoned in the dark bluish-green Venezuelan waters. The rusting Nabarima Floating, and Storage Offloading (FSO) facility noticeably listed, straining at the multiple anchor chains, and in obvious danger of sinking. Inside the deteriorating double-hull ship sloshed the opposing twin features of oil – an unprecedented threat and a seemingly forgotten fortune of some 1.4 million barrels of prime Corocoro crude left over a year ago, as export sanctions hit the industry, including the Petrosucre joint venture between PDVSA, and Italy’s energy giant Eni SpA.

Aboud and the FFSO group took damning photographs, a shocking video and drone footage of the tanker, which went viral with nearly half a million views (https://www.youtube.com/watch?v=8sXRU65-3eE), but they did not hang around to be questioned and likely detained by the notorious National Guard. Yet, he is far more terrified of the looming crisis that could affect his fishermen members and vulnerable communities across the Caribbean.

“We think it’s worth the risk of coming out here because you can see for yourself, we are not imagining it, these are not false images,” he declared in the video, gesturing to the lopsided ship which has taken on water in critical lower sections. “If something (else) goes on, if we have bad weather, there are a number of circumstances that could cause the vessel to flip and there’ll be no recourse,” Mr Aboud pointed out, given the overly active hurricane season.

“We shudder at the thought that if these anchor chains break or the anchor shifts, the vessel will capsize and spill the estimated 1.4 million barrels into our fishery ecosystem. The Caribbean people and our marine environment are facing an accelerating danger. The facts are leaning towards the largest environmental catastrophe about to occur, and all this because of inaction and lethargy, lackadaisical and delinquent administrative conduct,” he thundered in a public post.

Disclosing that the FFOS had written from the Prime Minister, Dr Keith Rowley, to the ministers of foreign and CARICOM affairs, energy and energy industries, and the US and European Union (EU) envoys, he cited the “misinformation being released by the Maduro regime,” questioning whether the oil is stored in sealed compartments and how secure these are should the Nabarima capsize.

“All of our appeals have been disregarded as if grassroots organizations are invisible and as if pollution of our beautiful Caribbean region does not matter,” he charged. “The Caribbean Sea is endangered, and your silence will not be forgiven” he told Dr Rowley, stressing “Responsible government must be proactive and ensure that this imminent environmental catastrophe does not decimate the Caribbean Sea.”

The US embassy issued a statement supporting “immediate action” insisting “activities undertaken to avert an ecological disaster” would not contravene any sanctions imposed against Venezuela. On Tuesday, a Trinidad and Tobago government team were finally allowed to visit the Nabarima, with their report due soon.

Guyana’s Civil Defence Commission (CDC) chief, Lieutenant Colonel Kester Craig announced in a Facebook post that analyses and modelling do “not show any direct impact on Guyana’s shores or marine ecosystem” but the situation is being monitored.

Aboud and FFOS on Wednesday welcomed global media reports that a Venezuelan tanker, the Icaro is transferring some of the oil. “This does not mean that the Caribbean is out of deep waters nor can we breathe a sigh of relief. There are insufficient measures in place to contain any spillage that may occur during the transfer especially since the FSO Nabarima is unstable. PDVSA must have necessary oil spill containment equipment around the vessel should the worst occur.”

He criticised CARICOM and the Organization of Petroleum Exporting Countries (OPEC) of which Venezuela is a member, adding that Trinidad and Tobago should renegotiate the 1989 Bilateral Oil Spill Contingency Plan. Despite the agreement, it took the government in excess of a month to get approval for the inspection team, he lamented, terming the delay “unacceptable.” CARICOM, Latin American, and other territories should agree on an emergency response Aboud advised. “The FSO Nabarima debacle is far from over but together as a global community, we were able to make positive steps towards a meaningful solution.”

*ID shivers, fearing hydrocarbon hazards like an Exxon Valdez-type spill in Guyana’s waters or the July 1979 oil tankers collision off Tobago that killed 26 sailors and sent 287,000 metric tonnes of crude into the Caribbean Sea. 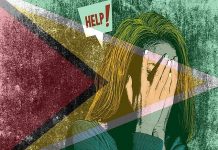