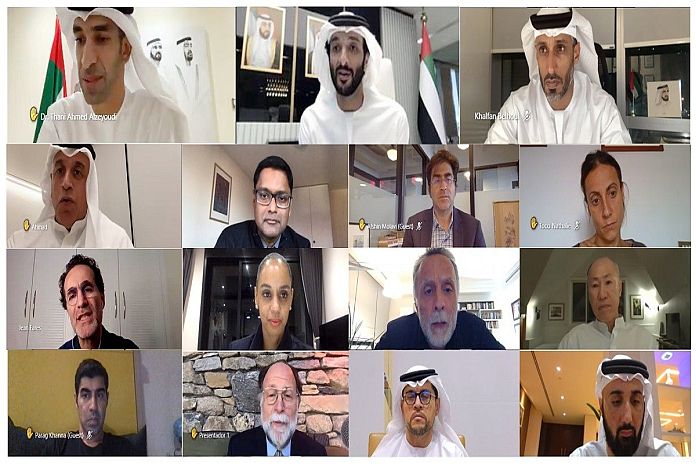 By Esraa Ismail and Hassan Bashir

ABU DHABI, United Arab Emirates, (WAM) – The ministry of economy, MoE, has launched the ‘International Advisory Council on the New Economy’, a first of its kind initiative, with the participation of international experts, advisors and economic policymakers, as well as influential national figures involved in the formulation and development of many of the UAE’s economic development programs.

Abdullah bin Touq Al Marri, Cabinet member and minister of economy, said: “The Council is a new initiative that the UAE is developing, through which we will work to develop ideas, proposals and formulate new economic policies.”

The Council will undertake a set of tasks related to the structure of the new economy, including the development of ideas and proposals; providing advice to decision-makers in new economic fields, development of research papers and studies; and development of new models for regional and international partnerships in the fields of the future economy.

In addition, the Council will contribute to coordination efforts with research centers and academic institutions, with the aim of strengthening the UAE’s position as a global hub for innovative ideas and sharing the UAE economy’s experience with external partners.

Bin Touq added that the changes the world is currently witnessing as a result of the pandemic are being reflected across all aspects of life, ranging from our daily lives to travel, trade and other vital economic sectors. However, the current circumstances do not limit the UAE’s aspirations. Instead, they motivate us to convert challenges into opportunities and employ them in the service of long-term development goals and objectives, he said.

Bin Touq continued, “The government of the UAE was the most prepared one to deal with most of the challenges that emerged as a result of COVID-19 and was also the most capable in adapting to changes compared to many other countries. Moreover, [today] the country is working according to an ambitious development vision for the next fifty years. Following an accurate and realistic understanding of the current economic scene, analysing indicators and extracting possibilities are essential to developing plans and initiatives in support of the country’s strategic directions.

“From this standpoint, the idea of the ‘International Advisory Council on the New Economy’ is a new initiative that brings together 15 leading thought leaders and influencers from around the world to explore the main economic issues awaiting the global economy. It will also study their implications for the UAE, understanding the big changes, developing new ideas and preparing for the future called the ‘new economy.’”

Bin Touq said, “The UAE, since its establishment, has been a futuristic country, as reflected by its development vision since its early beginnings, characterised by the reliance on the oil sector. In less than just 49 years, the country has entered the industries of space, aircraft, renewable energy, and communication and information technology. These achievements can be attributed to the government’s courageous decisions to invest in infrastructure and technology, develop its capabilities as a destination for travel and logistics, establish airlines and international ports, and develop research centers in the fields of space, clean energy, and many others.”

During the meeting, the Council discussed a number of main issues related to the current situation and potential shifts in the global economy as a result of the pandemic The concepts of new economy and various mechanisms that need to be formulated in relation to production and operation processes, priority sectors, ways to develop human capital, and the required changes in international relations were also discussed.