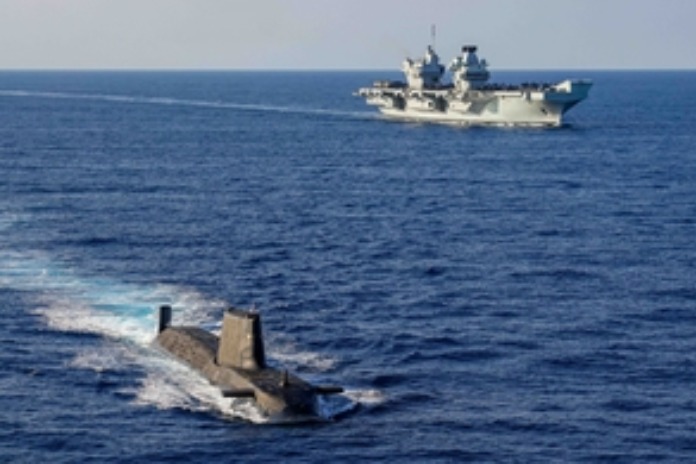 LONDON, England – On a visit to US Indo-Pacific Command (INDOPACOM) in Hawaii, UK Defence Secretary Ben Wallace met with the Commander Admiral John C Aquilino and announced that the UK Carrier Strike Group will undertake a series of multinational exercises with global allies in the Philippine Sea this August, the ministry of Defence, Ben Wallace reported.

UK defence secretary Wallace, said: “ As we witness a tilt in power towards the Indo-Pacific region, we are committed to working with our partners here to defend democratic values, tackle shared threats and keep our nations safe. The involvement of the UK’s fifth-generation Carrier Strike Group in this significant series of exercises right across the Indo-Pacific region highlights the renewed importance we place on the UK’s long-standing defence and security relationships with our valued partners and allies in the region. As announced in the Integrated Review of Defence, Security and Foreign Policy earlier in the year, the UK is committed to a more persistent presence in the Indo-Pacific.”

“Operating alongside Naval and Air Forces from the United States, Australia, France, Japan, New Zealand and the Republic of Korea, the UK Carrier Strike Group will undertake a number of integration exercises designed to build interoperability between like-minded international partners in this globally significant region of the world.

The HMS Queen Elizabeth led Strike Group will operate with a US Carrier Strike Group, which combined, will be the largest concentration of F-35 jets anywhere in the world,” a press release said, “Complex exercises like these will enable 617 Squadron to develop F-35 Lightning interoperability with partner nations, building a core of valuable Royal Air Force and Royal Navy experience in operating this cutting-edge technology. These air exercises will build upon the capability development that 617 Squadron achieved through the combat missions mounted from the Carrier in the East Mediterranean, during a dedicated period in support of Operation Shader, the UK mission to defeat Daesh in Iraq and Syria.”

The Carrier Strike Group will also undertake Anti-Submarine exercises with US Pacific Fleet with allied submarines, helicopters and P8 Maritime Patrol Aircraft. Overall, these events represent a crucial milestone in the regeneration of the UK Carrier Strike capability that will contribute to collective defence and security for decades to come. Carrier Strike Group 21 embodies the Prime Minister’s vision for the UK as an outward-facing, modern and responsible international actor who also takes its global defence and security responsibilities seriously and invests in them accordingly.

First Sea Lord Tony Radakin, said: “2021 marks the UK’s return to Carrier Strike with the first operational deployment of HMS Queen Elizabeth, the world’s first carrier designed around fifth generation aircraft. She is deployed with UK and US F35-B jets, accompanied by Royal Navy, US Navy and Royal Netherlands Navy ships as they travel 26,000 nautical miles to the Indo-Pacific. The Integrated Review and the uplift to the Defence budget provided by the Government enables us to have two aircraft carriers – HMS Queen Elizabeth and her sister ship HMS Prince of Wales. This provides us with the platform and ability to operate globally, supporting and working with our partners and friends.”

“Following on from the strike group’s inaugural deployment, the UK will permanently assign two Offshore Patrol Vessels to the region from later this year as well as contributing a Littoral Response Group (LRG) in the coming years. HMS Spey and HMS Tamar will deploy to the Indo-Pacific at the end of August 2021 and will be supported by partners during their operations, including Australia, Japan and Singapore,” the ministry of defence said in a press release.