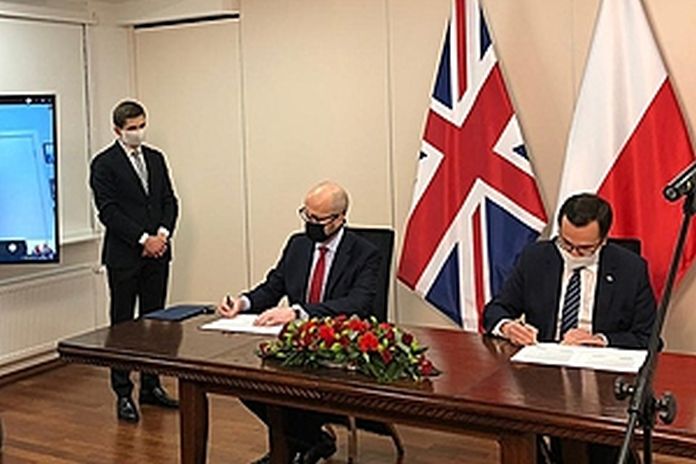 LONDON, England – Representatives from the UK and Poland yesterday signed an agreement committing to increased cooperation between the two countries to support the development of a major infrastructure project in Poland, the ‘Solidarity Transport Hub’.

This new transport hub based 40km outside of Warsaw will see the construction of a brand new hub international airport and railway interchange for Poland set over 3,000 hectares.

The agreement (Memorandum of Understanding) was signed by Poland’s deputy infrastructure minister, government commissioner for CPK Marcin Horała, and HMA of Great Britain and Northern Ireland to Poland Jonathan Knott (on behalf of the minister for exports at the department for international trade – Graham Stuart MP).

Minister for Exports, Graham Stuart said: “I’ve previously met with Polish ministers to champion UK expertise in delivering their ambitious plans to transform Polish connectivity. So I’m particularly proud to announce the deal we’ve struck with Poland’s infrastructure ministry. Poland is an ever more important trade partner for the UK and I’m delighted that, after more than two years work by my department, British firms’ experience and expertise can be at the heart of delivering this major boost to Poland’s trade and prosperity.

“The UK is home to some of the best project management, engineering, architecture and finance experts in the world. It is the role of our dedicated trade department, DIT, through trade support and export finance, to make sure their brilliance is showcased on the world stage.”

British businesses are set to benefit from the agreement. UK Export Finance, the government’s export credit agency, is considering a ‘line of credit’ to support UK suppliers, including those providing consulting and design services, to these major infrastructure projects.

Situated between Warsaw and Łódź, the new hub is expected to serve 45 million passengers annually when it opens in 2027, increasing to 100m when a further two runways are built. Over 1600km of new railway lines including high-speed lines are planned.

British architects and engineers are seeking to play a key role in supporting the Polish government to deliver the mega-project, which will see the construction of a major new high speed-rail hub to boost Poland’s regional connectivity and a state-of-the-art international hub airport, featuring new shops, entertainment facilities cultural amenities, spas and digital installations.

Early visions for the project have already been submitted by British based architect firms including Foster+Partners, Chapman Taylor, Zaha Hadid Architects, Grimshaw, Benoy, Pascall+Watson, Woods Bagot, Populous and KPF – resulting from a series of workshops arranged by the Department for International Trade and the British Embassy in Poland.

“The new Solidarity Transport Hub presents a once in lifetime opportunity to develop sustainable, integrated transport infrastructure that improves connectivity and supports economic growth across Poland. The new airport that sits at the centre of the hub is a globally significant project in its own right, as well as a catalyst for the wider programme.

“UK companies, such as Mott MacDonald, lead the world in the development of sustainable aviation and surface transport infrastructure – from our extensive work at Heathrow to that at other major world airports like Singapore, Hong Kong and New York JFK.

“We welcome the opportunity to work with the STH team to share this best practice and build capability through the development of this project – and this MOU will be a key enabler of such collaboration. I greatly appreciate the extensive work by DIT with industry representatives in building connections and setting up this agreement.”

Stuart Cairns, head of international airport’s Group, Bird & Bird LLP said: “The new Solidarity Transport Hub is arguably one of the most exciting new airport projects in development anywhere in the world.

“Following an introduction facilitated by the DIT, we have engaged extensively with the STH Team in Warsaw in respect of their plans to identify and appoint key partners for the Project. Our recent experience in successfully designing and managing similar procurements for key airport clients elsewhere in the world allowed us to put forward a very strong team and competitive offer to support STH at this key phase in the process.

“I’m delighted to say that having done so, we have now been appointed to advise on the first of these procurements and we are excited to be engaged so early and in such a critical way. We look forward to sharing international best practices, ensuring that the world’s finest consultants and contractors are engaged and ultimately supporting the success of this fantastic project.”