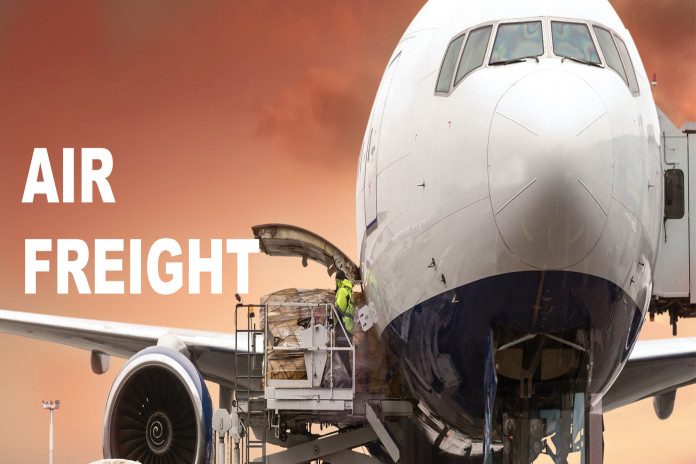 GENEVA, Switzerland – The International Air Transport Association (IATA) released data for global air freight markets showing that demand, measured in freight tonne kilometers (FTKs), contracted by 3.9 percent in August 2019, compared to the same period in 2018. This marks the tenth consecutive month of year-on-year decline in freight volumes, the longest period since the global financial crisis in 2008.

Air cargo continues to face strong headwinds from the intensifying trade war between the US and China, as well as weakness in some of the key economic indicators and rising political uncertainties worldwide. Global trade volumes are one percent lower than a year ago.

Trade-in emerging countries has been underperforming that of advanced nations throughout most of 2019. This is due to a higher sensitivity of the emerging economies to trade tensions, rising political instability and sharp currency depreciation in some of the key emerging markets.

“The impact of the US-China trade war on air freight volumes was the clearest yet in August. Year-on-year demand fell by 3.9 percent. Not since the global financial crisis in 2008 has demand fallen for 10 consecutive months. This is deeply concerning. And with no signs of a détente on trade, we can expect the tough business environment for air cargo to continue. Trade generates prosperity. Trade wars don’t. That’s something governments should not forget,” said Alexandre de Juniac, IATA’s director general and chief executive officer (CEO). 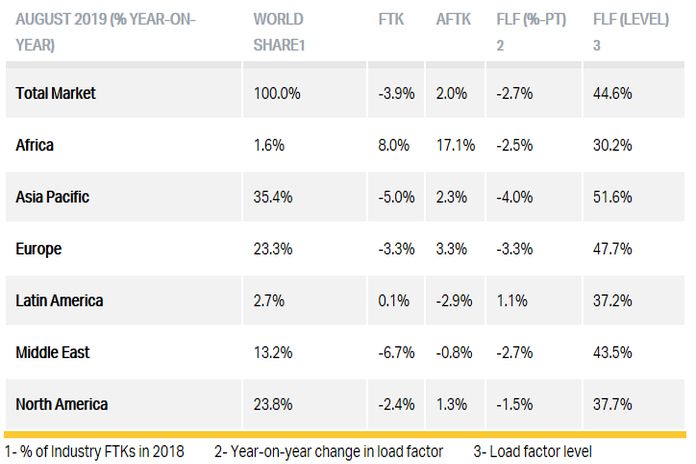 Asia-Pacific airlines saw demand for air freight contract by 5 percent in August 2019, compared to the same period in 2018. The US-China trade war along with the slowdown in the Chinese economy has significantly impacted this region. The temporary shutdown of Hong Kong International Airport – the largest cargo hub in the world added additional pressure. With the region accounting for more than 35 percent of total FTKs, this performance is the major contributor to the weak industry-wide outcome. Airfreight capacity increased by 2.3 percent over the past year.

North American airlines saw demand decrease by 2.4 percent in August 2019, compared to the same period a year earlier. Capacity increased by 1.3 percent. The US-China trade war and falling business confidence continue to weigh on the region’s carriers. Freight demand has contracted for the largest routes between Asia and North America, where seasonally adjusted volumes are down almost 5 percent compared to their level in July 2018.

Middle Eastern airlines’ freight volumes decreased 6.7 percent in August 2019 compared to the year-ago period. This was the sharpest drop in freight demand of any region. Capacity decreased by 0.8 percent. Escalating trade tensions, the slowing in global trade and airline restructuring have impacted the region’s performance since the fourth quarter of 2018. Economic uncertainty from oil price volatility among the region’s oil-reliant markets has added additional pressure.

Latin American airlines experienced an increase in freight demand in August 2019 of 0.1 percent compared to the same period last year and a capacity decrease of 2.9 percent. Low economic growth compounded by the US-China trade war and political instability in some countries have impacted the region’s performance. Recent currency volatility in the region’s key economies have also contributed.

African carriers posted the fastest growth of any region in August 2019, with an increase in demand of 8 percent compared to the same period a year earlier. This continues the upward trend in FTKs that has been evident since mid-2018 and makes Africa the strongest performer for the sixth consecutive month. Capacity grew 17.1 percent year-on-year. Strong trade and investment linkages with Asia have underpinned a double-digit increase in air freight volumes between the two regions over the past year. China recently confirmed a further $60 billion investment into the continent.