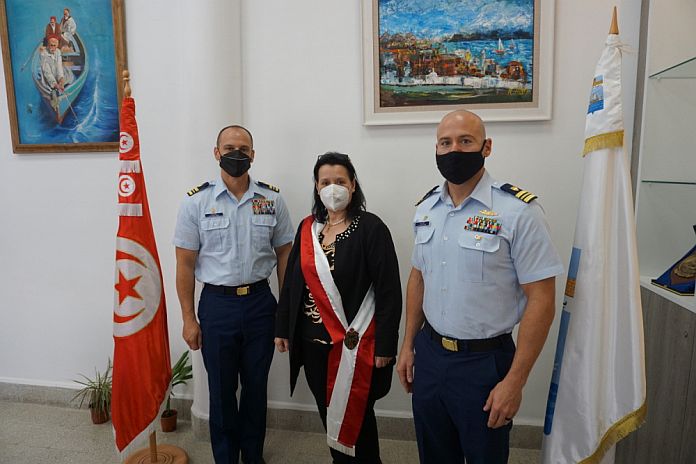 This port visit marks the cutters’ second stop while conducting operations in the US Sixth Fleet area of responsibility en route to their new homeport of Manama, Bahrain.

The Moulthrope and Goldman work in Tunis builds on previous military operations with Tunisian forces such as the USCGC Bear (WMEC 901) deployment conducting military-to-military operations with the Tunisian navy and royal Moroccan navy in 1999, and USCGC Dallas (WHEC 716) work with Tunisian navy counterparts to share best practices for responding to maritime issues and at-sea emergencies in 1995 as well as ongoing international training efforts.

“The exercises showcased both the Tunisian naval forces and US Coast Guard’s ability to operate as multi-mission partners through a variety of exercises ranging from defense operations to search and rescue and illegal fisheries enforcement — all of which highlighted our services’ similarities in both missions and responsibilities,” said Lt. Cmdr. Samuel Blase, commanding officer, Robert Goldman.

During their stop in Tunis, Moulthrope and Goldman engaged with navy leadership, local dignitaries and conducted military-to-military exercises with the Tunisian navy for interoperability and familiarization.

“It was an honor to help lead the first US Coast Guard visit to Tunisia in over 25 years and strengthen our partnership with the Tunisian naval force. The engagements and maritime exercises highlighted service capabilities, promoted interoperability between both nations, and enhanced stability throughout the Mediterranean Sea,” said Lt. Cmdr. Steven Hulse, commanding officer of Charles Moulthrope.

Charles Moulthrope and Robert Goldman are en route to their new homeport in Bahrain in support of the Navy’s US Fifth Fleet and US Coast Guard Patrol Forces Southwest Asia. While in the US Navy’s Sixth Fleet area of responsibility, the crews will support engagements with partner countries strengthening relationships and demonstrating our continued commitment to global maritime security and stability.

Charles Moulthrope and Robert Goldman are the first two of six Sentinel-class ships headed to US. Patrol Forces Southwest Asia. Established in 2002 to support Operation Iraqi Freedom, PATFORSWA played a critical role in maritime security and maritime infrastructure protection operations. It is the US Coast Guard’s largest unit outside of the United States.

The US Coast Guard remains operational during COVID-19, following all COVID-19 safety precautions and regulations.

US Sixth Fleet, headquartered in Naples, Italy, conducts the full spectrum of joint and naval operations, often in concert with allied and interagency partners, to advance US national interests and security and stability in Europe and Africa.

What comes after the commodity supercycle and the Pandemic? Policies to tackle...

Ontario supports plan to safely extend the life of the Pickering...