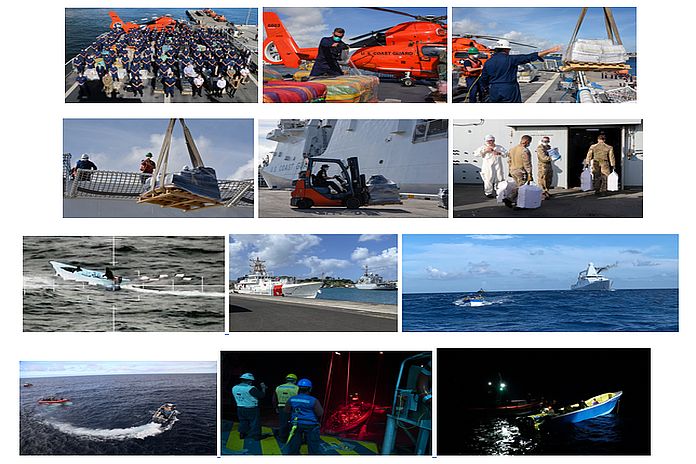 The Coast Guard’s strong international relationships, with key partners like the United Kingdom, France, and the Netherlands, along with our specialized capabilities and unmatched authorities, allow for a unity of effort to disrupt transnational crime organizations, which threaten America and our partner nations.

The drugs were interdicted in international waters of the Eastern Pacific Ocean off the coasts of Mexico, Central and South America, including contraband seized and recovered during 20 interdictions of suspected drug smuggling vessels by eight American and United Kingdom ships:

“This patrol highlights our crew’s continued commitment to protecting the American people from our adversaries,” said Capt. Todd Vance, James’ commanding officer. “Despite COVID, the James crew demonstrated supreme resilience, and the results of their exceptional performance are being showcased [today].”

“I am honoured to be able to pay tribute to the successes of the team here today, and recognise the role the Royal Navy and UK National Crime Agency has played in this joint operation,” said Commodore Phil Nash, Royal Attaché, United Kingdom Embassy. “Working seamlessly with US and international colleagues, the presence of RFA Argus has prevented the $54 million of drugs offloaded here from reaching the streets in the last few months; taken together with a wider effort this year by UK ships HMS Medway and RFA Mounts Bay, around $650 million of drugs have been stopped. This has been a genuine team effort – the key to success continues to be the close working relationship and collaboration between our nations.”

Numerous US agencies from the Departments of Defense, Justice and Homeland Security cooperated in the effort to combat transnational organized crime. The Coast Guard, Navy, Customs and Border Protection, FBI, Drug Enforcement Administration, and Immigration and Customs Enforcement, along with allied and international partner agencies, play a role in counter-drug operations. The fight against drug cartels in the Eastern Pacific Ocean requires unity of effort in all phases from detection, monitoring and interdictions, to criminal prosecutions by US attorneys in districts across the nation.

During at-sea interdictions, a suspect vessel is initially detected and monitored by allied, military or law enforcement personnel coordinated by Joint Interagency Task Force-South based in Key West, Florida. The law enforcement phase of counter-smuggling operations in the Eastern Pacific is conducted under the authority of the Coast Guard 11th District, headquartered in Alameda, California. The interdictions, including the actual boardings, are led and conducted by members of the US Coast Guard.