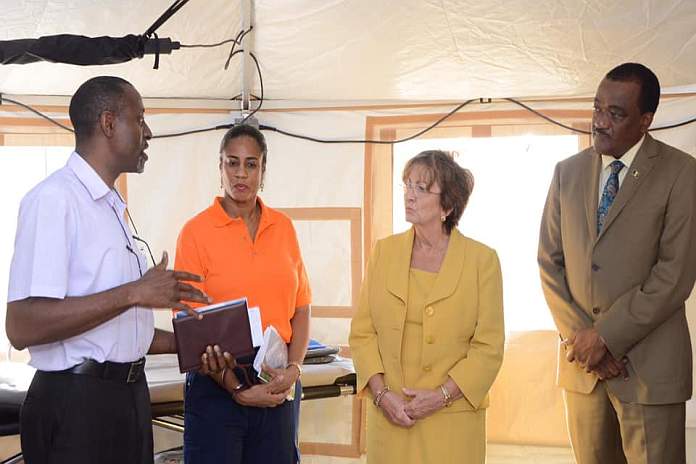 BRIDGETOWN, Barbados – US Ambassador to Barbados Linda Taglialatela, minister of health and wellness Jeffrey Bostic, and members of the Barbados Defense Force (BDF) participated in an official handover ceremony of a new field hospital at the Garrison Savannah in Bridgetown.

The United States, through US Southern Command, invested USD$1.7 million to develop the emergency medical team, including the provision of medical equipment and supplies. “The United States is proud of its partnership with Barbados”, said ambassador Taglialatela. “Two pillars of our US-Caribbean 2020 strategy are health and security, and it’s the fruits of cooperation in those areas that we see today”, she added.

The Level 2 emergency medical team is the first of its kind in the Caribbean. Its 45-member staff will have the ability to treat nearly 100 patients per day in crisis situations, including during hurricane recovery.  The Pan-American and World Health Organizations helped train the hospital medical team, which recently earned WHO certification.

BDF Colonel Grannum/Minister Bostic also thanked the US Embassy for its longstanding partnership with Barbados and the Eastern Caribbean.

The contribution of the field hospital and medical team training is an integral part of the US Embassy’s humanitarian and security assistance in the Caribbean. The hospital will be part of Exercise Tradewinds, an annual USD$3 million multi-nation security exercise in the Caribbean with over 700 regional participants. Guyana will host the exercise in 2020 and Barbados in 2021. Last year, the US Naval Ship Comfort treated more than 13,000 patients in Grenada, Saint Lucia, and St Kitts and Nevis.

Such projects also strengthen the US-Caribbean Resilience Partnership, a collaborate effort to build regional capacity to confront disaster response and promote resilience. In 2019, the United States announced $9.5 million for disaster resilience funding in the Caribbean.