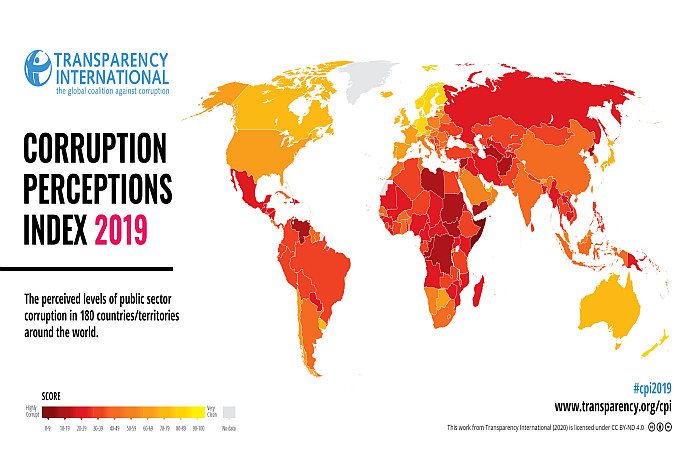 WASHINGTON, USA –  The United States has received its lowest score in eight years on the Corruption Perceptions Index (CPI) by Transparency International, dropping two points to score 69 out of 100. The Index draws from over a dozen independent expert assessments and surveys to measure perceptions of public sector corruption in 180 countries and territories. Scores on the CPI range from zero (very corrupt) to 100 (not corrupt).

Gary Kalman, Director of the new US office of Transparency International, said the following:

“Weaknesses in our laws are being exploited by a growing list of bad actors at home and abroad. From foreign despots to terror networks, drug cartels to human traffickers, some of the world’s most destructive forces are benefitting from gaps in US law. Multiple corruption scandals in the last year alone have shown that transnational corruption is often facilitated, enabled, or perpetuated by countries toward the top of the Index, including the United States. Fortunately, bipartisan legislation currently before Congress, the ILLICIT CASH Act and the Corporate Transparency Act would go a long way toward stopping these interests from using the US as a laundromat for their dirty cash.”

Denmark and New Zealand top the Index with 87 points each, while Syria, South Sudan, and Somalia are at the bottom, with 13, 12, and 9 points, respectively. Decreases in score for several of the most advanced economies in the world including Canada (-4), France (-3) and the UK (-3) show that they, along with the United States, must not be complacent in the fight against corruption.

Across the world, more than two-thirds of countries and territories score below 50, with an average score of 43. Since 2012, only 22 countries have significantly improved their scores, while 21 have declined significantly.

“Frustration with government corruption and lack of trust in institutions speaks to a need for greater political integrity,” said Delia Ferreira Rubio, chair of Transparency International. “Governments around the world must urgently address the corrupting role of special interest money in campaign financing and the undue influence it exerts on our political systems.”

“More than in any other major developed country, people in America believe that rich people buy elections,” said Scott Greytak, advocacy director for Transparency International’s US office. “When people think their government is for sale, they stop believing in its future.”

“In the US, many of our laws on campaign finance, lobbying, and ethics were written almost 50 years ago. The world has changed since then, and we plan to learn from it by bringing political reforms from across the globe to American audiences,” continued Greytak.