The historic visit to Guyana by the United States (US) Secretary of State, Mike Pompeo has prompted a public frenzy of conspiracy theories, ranging from an impending invasion of neighbouring Venezuela to pressing the month-old government on its hold-up of the Payara permit for American oil giant ExxonMobil.

But the new minister of natural resources, Vickram Bharrat, this week, dismissed concerns that Pompeo’s stopover is in any way tied to the processing of permits for the third well, saying that the multinational must meet the necessary requirements and environmental standards before any approval is granted. A second draft of terms should be completed around the same time that the high-ranking official is here, but there will be no influence on that process, he added.

In a special press briefing via teleconference, an unnamed senior State Department spokesman, on Wednesday touched on the question of Guyana’s border dispute with Venezuela which is now before the International Court of Justice (ICJ) for review. He maintained that the US position is “clear” and “unchanged” insisting, “Any disputes over the border should be resolved peacefully, as the two sides seem to be doing. So, we don’t see any change on that front.”

The official added that “it’s in Guyana’s own interest, whether it was the previous government or this one, to try to work together to try to resolve the crisis in Venezuela” terming it “the hemisphere’s largest refugee and humanitarian crisis” and one, “We need to all work together to find a way to bring this to a close.”

He denied that the US is pushing for the Payara project’s quick approval. “First on Exxon, no. I mean, this is certainly not an effort to put any pressure on Guyana. I think it’s more a celebration of their great success in this. Obviously, we think American companies are really competitive” given “the way our companies behave and (that) they’re subject to (the) Foreign Corrupt Practices Act and so on. You look at that and then look at what China does,” he replied to questions.

Acknowledging that the Guyana opposition has plenty of their own contacts, the State Department official said, “We’re not trying to broker contacts between the oil companies (with) either them or the government. We’re going to meet with the oil companies, see how they’re doing (and), see what their plans are. We’re meeting with the government separately.”

Minister Bharrat was appointed by the People’s Progressive Party/Civic administration led by president Irfaan Ali, which only came to power in early August, after a bitter five-month-long elections stand-off ended with the incumbent A Partnership for National Unity (APNU) coalition dominated by the People’s National Congress. The US had earlier slapped initial visa restrictions on unnamed individuals undermining democracy with Pompeo bluntly warning that the “The (David) Granger government must respect the result of democratic elections and step aside.”

Pompeo’s four-day visit to South America swings from Suriname, to Guyana later Thursday and on Friday, then Brazil, and finally Colombia on September 20. It comes less than two months before the United States presidential election scheduled for Tuesday, November 3, 2020, in which Republican President Donald Trump is seeking to triumph over the Democratic challenger, former vice president Joe Biden.

According to a transcript posted on the State Department’s website, the spokesman said, “The Exxon evaluation will be done on its own merits by the Guyanese experts,” declaring, “I think this is a case where everybody is in agreement as to what they want and it’s a question of what do we do to get us from here to there.” 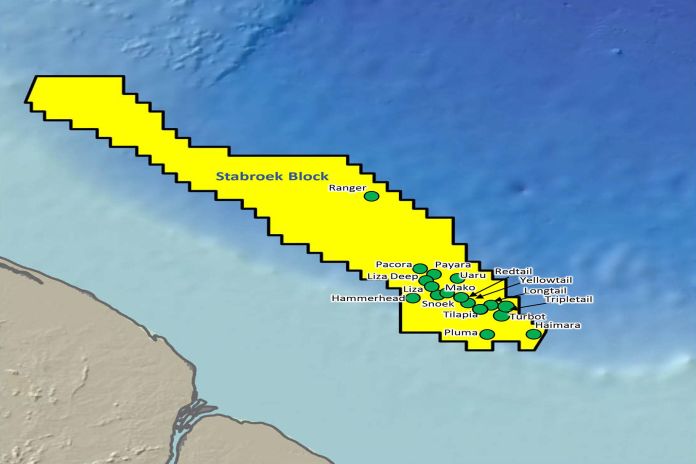 Earlier this month, ExxonMobil (XOM) announced yet another big discovery, its 18th, offshore Guyana at the Redtail-1 well which will add to the previously announced estimated recoverable resource of more than eight billion oil-equivalent barrels from the sprawling and lucrative Stabroek Block.

The Stabroek Block is 6.6 million acres (26,800 square kilometres) and XOM has had uncanny success with its deep-water oil finds in the Atlantic Ocean just off the coast, including Liza, and other successful exploration wells at Snoek, Turbot, Ranger, Pacora, Longtail, Hammerhead, Pluma, Tilapia, Haimara, Yellowtail, Tripletail and Mako, mostly bearing the common names of local fishes.

After a decades-long search, ExxonMobil made the first commercial discovery in Guyana in 2015 and started production in December 2019 from the Liza Destiny floating production and offloading vessel (FPSO), which can produce up to 120,000 barrels per day.

The Liza Phase 2 project, is expected to start up in 2022 and produce up to 220,000 barrels per day, with construction underway in Singapore on the Liza Unity FPSO. A third vessel for the Payara development, with a production capacity of 220,000 barrels a day, is on hold, pending the government’s approval in the face of public calls for a comprehensive revision and better terms. ExxonMobil previously indicated that it planned to make a final decision on the Payara project later this month. While president Ali has signalled a tougher stance on XOM, his government has steered clear of expectations it will seek to change the much-criticised miserly and lopsided 2016 Production Sharing Agreement.

Stressing that this country now has “a government that clearly is the choice of the Guyanese people” as against the previous administration that overstayed its constitutional term, the spokesman said Pompeo’s trip “underscores the important moment Guyana is traversing. The country’s newly elected leaders can build an all-inclusive…democracy that consolidates rule of law, attracts transparent private-sector investment, and exploits natural resources for the benefit of all of its citizens.”

“In Suriname you’ve had a government that…was perhaps more associated with personality, but where the leadership had some serious defects that limited the ability to maintain good relations with a lot of the other countries in the region. That’s now been changed out and we’re very hopeful that we’ll see regular, peaceful rotations of power in both countries without the kind of problems we’ve had in the past.”

Even as “we’re supposed to celebrate the return of democracy” the spokesman pointed out that the four countries are all very close to Venezuela and have been affected in one way or another by the insecurity and instability there. So that’s another purpose of the trip to “simply to talk to the neighbours and see what’s affecting them and what can be done to try to ameliorate that.”

“It’s not just that Venezuela produces refugees; they are producing security problems for all these countries by harbouring terrorists (and) narco-traffickers. When we’re trying to interdict drugs – and we’ve put a lot more assets into that and working closely with all the Caribbean partners – where are those coming from? A good deal of the activity seems to be centred in Venezuela now.”

While in Guyana, the Secretary of State will hold meetings with president Ali, Foreign minister Hugh Todd and secretary-general of the Caribbean Community (CARICOM), Irwin LaRocque. “He will thank CARICOM for its essential role in supporting Guyana’s democratic process as its electoral count dispute played out” and the US and Guyana will exchange diplomatic notes for joint maritime patrols to interdict narcotics. Pompeo will also sign a Growth in the Americas memorandum of understanding for Guyana to improve its investment enabling environment.

Similar talks are to be held with the Surinamese president Chan Santokhi and foreign minister Albert Ramdin. “Suriname has large offshore oil reserves. The Secretary will meet with local representatives of US mining and oil companies that are part of this sector’s critical investment in Suriname’s prosperity and future growth. The Secretary will highlight through these meetings how US companies throughout the hemisphere invest responsibly and transparently. This draws a stark contrast with China, whose predatory loans and vanity projects saddle countries in the Western Hemisphere with unsustainable debts and threats to national security and sovereignty,” the official charged.

(Complete briefing is at https://www.state.gov/briefing-with-senior-state-department-official-on-the-secretarys-upcoming-travel-to-suriname-guyana-brazil-colombia-and-texas/)

*ID recalls the famous words of another US Secretary of State, Henry Kissinger: “America has no permanent friends or enemies, only interests”.