LONDON, England –  On Sunday, the Venezuela national assembly elections were held admid COVID-19 protocols in 14, 221 polling stations, with 14,400 candidates participate from 107 political organizations, “The United Kingdom does not recognise the result of the illegitimate Venezuelan National Assembly election held on December 6, 2020.”

President Nicolas Maduro affirmed his commitment to the Venezuelan people casting his ballot, said: “I am proud to be Venezuelan, to have a free and conscious homeland. We had the patience and the wisdom to wait for this day and end that awful National Assembly that brought the plague of sanctions, cruelty, pain and suffering.”

He later congratulated the candidates and declared that in the past 22 years, the PSUV has won through the vote rather than through violence, proof of the party’s democratic and popular nature.

Preliminary results point to the PSUV-GPP coalition victory with 67.6 percent of the votes for Venezuela’s National Assembly, and a new session to commence January 5, 2021.

Vice president Delcy Rodríguez told reporters after voting in Caracas. “Venezuela is giving an example to the world” and “despite the aggressions the country lives with the criminal blockade, here is Venezuela expressing itself democratically.” 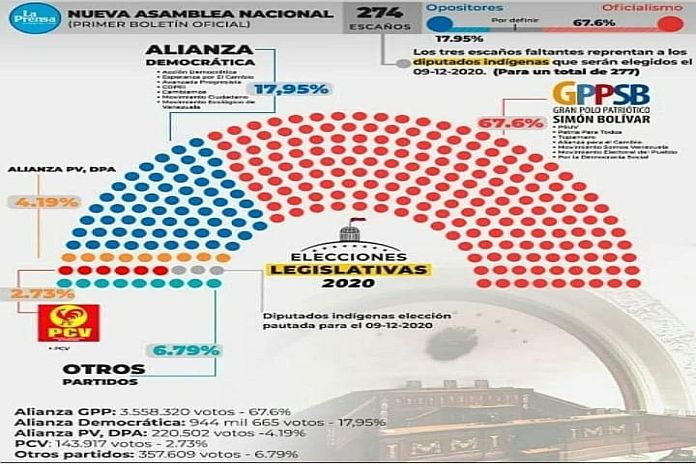 Following the Venezuelan National Assembly elections on December 6, 2020, the Foreign, Commonwealth and Development Office (FCDO) in a statement said:

“The Venezuelan National Assembly election on 6 December was neither free nor fair. It did not meet internationally accepted conditions, as called for by the International Contact Group on Venezuela including the UK, the Organisation of American States, the European Union, and others; nor did it meet the requirements of Venezuelan law. The UK considers the election to have been illegitimate and does not recognise the result.

“The UK recognises the National Assembly democratically elected in 2015 and recognises Juan Guaidó as interim constitutional president of Venezuela.

“It is vital that Venezuelans are given the opportunity to vote soon in presidential and legislative elections that are free, fair and effectively overseen. The UK considers that restoring democracy is an essential step towards ending the political, economic and humanitarian crises afflicting Venezuela’s long-suffering people and calls on all its leaders to commit to supporting a solution to this end.”

New York Public University professor Danny Shaw said: “Everything you hear about Venezuela in my country is a lie. Venezuelan people can give democracy lessons to the US government.”