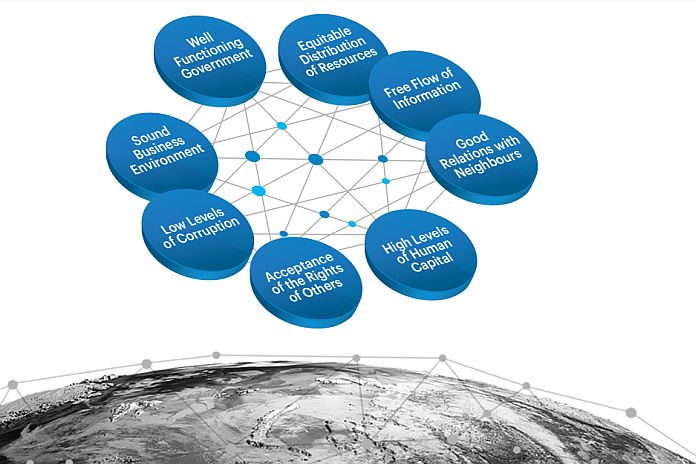 By The Institute for Economics & Peace (IEP)

Positive Peace is a transformational concept. Empirically based, it shifts the focus away from the negative to the positive aspects that create the conditions for a society to flourish. Due to its systemic nature, improvements in Positive Peace are associated with many desirable outcomes for society, such as higher GDP growth, better measures of wellbeing, higher levels of resilience and more peaceful societies. More importantly, it provides a theory of social change, and explains how societies change and evolve.

Humanity is nearing a tipping point and facing challenges unparalleled in its short history. Many of these problems are global in nature, such as climate change, ever-decreasing biodiversity, depletion of the earth’s freshwater, and overpopulation. Such global challenges call for global solutions and require cooperation on a scale unprecedented in human history. In a hyper-connected world, the sources of many of these challenges are multidimensional, increasingly complex and span national borders. For this reason, finding solutions requires fundamentally new ways of thinking.

Peace is the prerequisite for the survival of humanity in the 21st century. Without peace, it will not be possible to achieve the levels of trust, cooperation and inclusiveness necessary to solve these challenges, let alone empower the international institutions and organisations necessary to address them. In the past, peace may have been the domain of the altruistic, but in the current century it is everyone’s self-interest.

Without an understanding of the factors that create and sustain peaceful societies, it will not be possible to develop the programmes, create the policies or understand the resources required to build peaceful and resilient societies.

Positive Peace provides a framework to understand and to address the many complex challenges the world faces. Positive Peace is transformational in that it is a cross-cutting facilitator of progress, making it easier for businesses to sell, entrepreneurs and scientists to innovate, individuals to produce and governments to effectively regulate.

In addition to the absence of violence, Positive Peace is also associated with many other social characteristics that are considered desirable, including stronger economic outcomes, higher resilience, better measures of wellbeing, higher levels of inclusiveness and more sustainable environmental performance.

Therefore, strong Positive Peace can be seen as creating an optimal environment in which human potential can flourish.

Understanding what creates sustainable peace cannot be found in the study of violence alone.

A parallel can be drawn with medical science. The study of pathology has led to numerous breakthroughs in our understanding of how to treat and cure disease. However, it was only when medical science turned its focus to the study of healthy human beings that we understood what we needed to do to stay healthy: physical exercise, a good mental disposition, and a balanced diet are some examples. This could only be learned by studying what was working. In the same way, the study of conflict is different from the study of peace, and produces very different outcomes.

Positive Peace is systemic and requires new thinking. Systems thinking originated in the study of organisms, and is now used by sociologists. It can also assist in understanding the way countries and nations function and evolve. When combined with Positive Peace, systems thinking provides new ways of conceptualising and explaining societal change. As one example – a system is more than the sum of its parts, and cannot be understood merely by breaking it down and analysing its constituent parts. Positive Peace consists of eight Pillars, but each of these Pillars does not correlate with peace as strongly as the sum of all components, highlighting that the whole is more than its parts.

This distinctly contrasts the notion of linear causality, which dominates decision making today and involves identifying a problem, detecting its cause, and tackling the root. Without a fuller understanding of underlying system dynamics, the linear approach creates unintended consequences. The failure to solve some of society’s fundamental challenges is a testimony to this. Systems thinking opens new ways of understanding nations and how they evolve. In systems, relationships and flows are more important than events. Events or problems represent the outcomes of the relationships and flows. This is why it is important to look at the multidimensional concept of Positive Peace as a holistic, systemic framework.

Positive Peace defines the goals towards which a system needs to evolve. Interventions should nudge the system towards higher levels of Positive Peace, rather than creating radical change, which runs the risk of ripping the fabric of society.

Importantly, viewing nations as systems provides a framework for understanding the relationships between humanity and the broader systems, such as the atmosphere and biosphere, which we intersect and depend upon. Systems are self-regulating and self-modifying and operate on two levels: first, as a collection of interconnected subsystems; and second, as part of the larger systems surrounding it. Understanding these interdependencies is essential to meeting the global challenges of our age.

Different countries have different aims, or intent. Societies also have both formal and informal rules, referred to as encoded norms, which govern societies, and aim to maintain the system in a stable state. They regulate inputs, creating what is known as mutual feedback loops. This can be observed in many societal processes, such as when a government stimulates the economy in response to a drop in GDP or deploys more policing resources when there is a rise in crime. Each country’s system will be unique with different social norms and governance, although following the same general principles.

With differences in intent and encoded norms, any two nations may react differently to the same stimulus. Tipping points also occur within systems due to lagged and non-linear relationships. IEP’s research shows evidence of tipping points in relation to peace and corruption, and peace and per capita income, to name some examples. In the past, societies have been understood through the lens of causality. In the future, embracing these holistic, systemic approaches will forge our ability to manage an age of unprecedented challenges.

Seen in this light, Positive Peace and systems thinking comprise an overarching framework for understanding and achieving progress not only in the level of global peacefulness, but in many other interrelated areas, including better economic progress and social advancement. Positive Peace provides the optimal environment for human potential to flourish.

The Institute for Economics & Peace (IEP) is an independent, non-partisan, non-profit think tank dedicated to shifting the world’s focus to peace as a positive, achievable, and tangible measure of human wellbeing and progress.

IEP achieves its goals by developing new conceptual frameworks to define peacefulness, providing metrics for measuring peace and uncovering the relationships between business, peace and prosperity, as well as promoting a better understanding of the cultural, economic and political factors that create peace.

IEP is headquartered in Sydney, with offices in New York, The Hague, Mexico City, Brussels and Harare. It works with a wide range of partners internationally and collaborates with intergovernmental organisations on measuring and communicating the economic value of peace.