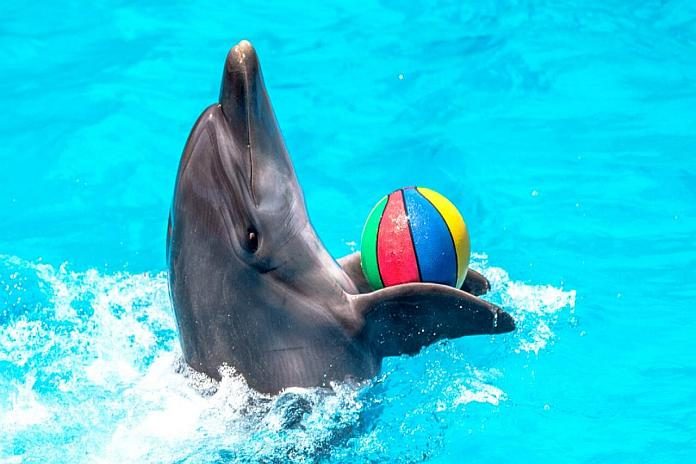 This is likely unknown to many Canadian tourists who visit sun destinations like Florida, Mexico and the Caribbean. Some 64 percent of Canadians polled have gone on holiday to a destination where dolphin tourism was offered.

When we look at dolphins they may appear to be smiling, but nothing could be further from the truth. Millions of animal lovers every year are tricked into thinking that dolphin shows and swim-with-dolphin experiences sold by the world’s largest travel companies are humane, educational and support conservation efforts.

The report, Behind the Smile, is the most comprehensive assessment of captive dolphins to date. It reveals that globally, there are 336 dolphin entertainment venues in 54 countries, including the United States, Mexico, the Caribbean, and China, which confine at least 3,000 dolphins.

Melissa Matlow, campaign director for World Animal Protection says, “For wide-ranging, social and intelligent animals like dolphins, a life spent in a concrete tank entertaining tourist is no life at all. Every ticket sold is an incentive for this industry to continue breeding and capturing dolphins for a lifetime of suffering.”

Fortunately, governments and travel companies are starting to respond to scientific evidence and public pressure against keeping dolphins in captivity. Last June, Canada passed legislation banning the breeding, display, and trade of cetaceans (whales, dolphins and porpoises) making it illegal to possess cetaceans for purposes other than research or rehabilitation.

Also in Canada, Transat and Air Canada have shown leadership on this issue. Transat has ceased commercializing all shows featuring captive marine mammals, including swimming with dolphins, with its holiday packages and flights-only sales. In so doing, the company is asserting its leadership in responsible tourism and responding to the concerns of travellers who are increasingly sensitive to the well-being of these wild animals.

“Transat supports the actions of World Animal Protection and is committed to helping its local incoming tourism partners, including its own Trafic Tours business unit, to cease commercializing such activities by finding economically viable and socially acceptable ways to replace them within two years,” says Odette Trottier, director, communications and corporate affairs for Transat.

Peter Fitzpatrick, director of corporate communications for Air Canada, Central Canada stated, “By the end of August 2020, Air Canada and its subsidiaries (including Air Canada Vacations) will no longer directly sell or promote packages to or generate revenue from, attractions that involve the captivity of current or future generations of dolphins.”

However, market research shows that there is still work to do to educate and influence Canadian tourists, booking sites and travel companies. For example, 50 percent of Canadian tourists still consider keeping dolphins in enclosures acceptable and one-third of Canadian travellers have participated in at least one dolphin-related activity in the past three years.

“Canadian attitudes and behaviours are changing,” says Matlow. “When people learn the truth about how dolphins suffer, they don’t want to participate. That’s why we are calling on travel companies like Expedia Group and others that are lagging behind to stop supporting activities that cause harm to animals.”

World Animal Protection’s goal is to make this the last generation of dolphins to suffer for our entertainment.