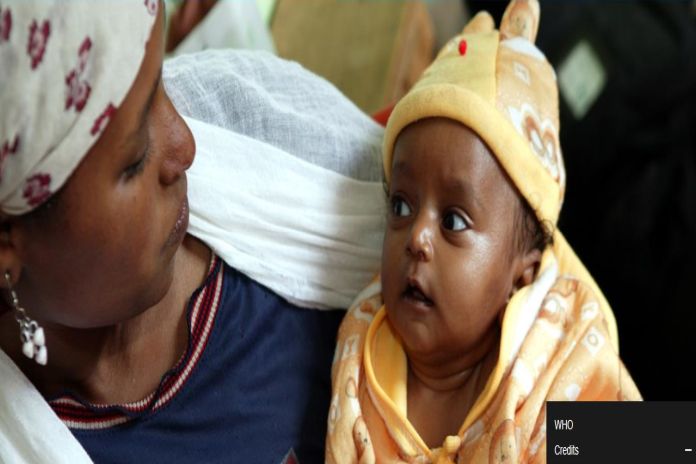 GENEVA, Switzerland — The proportion of children under five years of age chronically infected with hepatitis B (HBV) dropped to just under one percent in 2019 down from around five percent in the pre-vaccine era (the period between the 1980s and the early 2000s), according to new estimates from the World Health Organization (WHO).

This marks the achievement of one of the milestone targets to eliminate viral hepatitis in the Sustainable Development Goals ─ to reach under one percent prevalence of HBV infections in children under five years of age by 2020.

“No infant should grow up only to die of hepatitis B because they were not vaccinated ─ today’s milestone means that we have dramatically reduced the number of cases of liver damage and liver cancer in future generations,” said Dr Tedros Adhanom Ghebreyesus. “Preventing mother-to-child transmission of hepatitis B is the most important strategy for controlling the disease and saving lives. Even in the midst of the COVID-19 pandemic, we must ensure that mothers and newborns have access to life-saving services including hepatitis B vaccinations.”

On World Hepatitis Day 2020, WHO is calling for united and stepped-up action to build on this achievement through intensified efforts to prevent mother-to-child transmission of HBV through testing pregnant women and provision of antiviral prophylaxis to those who need it and maintaining and expanding access to hepatitis B immunization and birth dose vaccine.

Globally, more than 250 million people are living with chronic HBV infection. Infants are especially vulnerable: about 90 percent of children infected with HBV in their first year of life become chronic HBV carriers. HBV attacks the liver and claims the lives of nearly 900 000 people each year.

Infants can be protected from HBV through a safe and effective vaccine that provides over 95 percent protection against infection. WHO recommends that all infants receive a first dose of the hepatitis B vaccine as soon as possible after birth – preferably within 24 hours – followed by at least two additional doses.

The scale-up of hepatitis B vaccine worldwide over the last two decades, which has been in large part due to the support provided by Gavi, the Vaccine Alliance, has been a great public health success story

and contributed to the decrease in HBV infections among children. In 2019, coverage of three doses of the hepatitis B vaccine during childhood reached 85 percent worldwide, up from around 30 percent in 2000. However, access to the first critical dose within 24 hours of birth remains uneven. Global coverage of this birth dose is 43 percent, but this drops to 34 percent in the WHO Eastern Mediterranean Region and only six percent in the WHO African region.

“Expanding access to a timely birth dose of the hepatitis B vaccine is the cornerstone of efforts to prevent mother-to-children transmission of HBV. For countries especially in regions such as sub-Saharan Africa, where the birth dose of hepatitis B vaccine has not yet been introduced, it is a priority to assure that protection as early as possible,” said Dr Meg Doherty, director of global HIV, hepatitis and STI programmes.

An additional way to protect children is to provide pregnant women with antiviral treatment to reduce mother-to-child transmission of HBV. WHO already recommends routine testing of all pregnant women for HBV, as well as HIV and syphilis as early as possible in their pregnancy. In view of new evidence on the safety and efficacy of antiviral prophylaxis in pregnant women and their children, WHO is issuing today two new recommendations:

In countries that have already achieved high coverage of hepatitis B immunization, including timely birth dose, routine testing for HBV infection among pregnant women and antiviral prophylaxis for those in need is an additional opportunity to prevent onward transmission from mother to child.

“Stopping vertical transmission of HBV is a key pillar of the global ‘triple elimination’ initiative, which seeks to eliminate mother-to-child transmission of three infections that are prevalent in low- and middle-income countries: HIV, syphilis and hepatitis B virus,” added Dr Doherty.

Eliminating mother-to-child transmission of HBV is also an important stepping stone for reaching the targets of WHO’s global hepatitis strategy, which aims to reduce new hepatitis infections by 90 percent and deaths by 65 percent, compared to 2015 levels.

COVID-19 threatens to hamper progress in eliminating HBV. According to a new modelling study conducted by Imperial College London in collaboration with WHO, disruptions to the hepatitis B vaccination programme due to the pandemic could have a serious impact on efforts to reach the targets of the global strategy.

Under a worst-case scenario, with high levels of disruptions of both the birth dose and childhood HBV immunization (by 60 percent and 20 percent for one year respectively), as well as a delay and slow recovery in the expansion of the vaccination programme towards the planned 2030 WHO-targets in the post-COVID-19 period, there would be a projected 5.3 million additional chronic HBV infections among children born between 2020 and 2030 and one million additional HBV-related deaths among those children later on. Thus, missed opportunities now to prevent new HBV infections will have a long-lasting and life-impacting effect.