The following forms part of a three-part series from an exclusive interview with the Caribbean candidate for secretary-general of the Organisation of American States (OAS) Maria Fernanda Espinosa, during her visit to Saint Lucia, January 24.

How the candidacy come about

Janeka Simon: I know that you are being supported by the governments of Antigua and Barbud and; St Vincent and the Grenadines. Did they approach you with this idea or did you become interested in and then and link-up with them?

The Caribbean candidate for secretary-general of the OAS announces acceptance

Maria Espinosa: No, they came, and suggested that I’ll be a good candidate for the OAS position of secretary-general. Having known me, they saw me perform as president of the United Nations General Assembly (UNGA). They know first-hand that I have worked hand-in-hand with CARICOM countries putting at the forefront the Caribbean agenda at the UN and in the international arena especially issues of disaster, climate, financing for development, climate finance, et cetera. So, they know and identify with this possibility.

I understand that they tried to find a Caribbean candidate, but they saw that I have my heart in the Caribbean. I know the Caribbean reality, in that, I can contribute from the OAS to serve the people of CARICOM. So that’s how it came about.

For me, it was an honor and a privilege, but I had to think about it. So, it took me, a few weeks to ask other countries in the Caribbean, but also in the continent to see if they would support my candidacy and after exploratory meetings, I decided to accept this invitation.

Relationship with the Caribbean and CARICOM

Janeka Simon: Talk to me a little bit about your relationship with the Caribbean and CARICOM. What is it that you think makes you able to represent us and our interests?

Maria Espinosa: I think the secretary-general of the OAS should represent the interests of the 34 Member States and should be able to build bridges to establish a true platform for dialogue, for interaction, for consensus building; but also for handling and managing dissent as well.

In the case of the Caribbean, I have more than 25 years of professional experience and more working on the environmental front, on the development front. I have always teamed up with CARICOM countries on international – multilateral negotiations. More recently as president of the general assembly, I lounge my world campaign against single-use plastics in Antigua and Barbuda. I put CARICOM countries, The Bahamas, in this case, at the forefront of negotiations of a political declaration on the Sustainable Development Goals, (SDGs) and preparing the Oceans Conference under the leadership of Trinidad and Tobago. The issue of middle-income countries and financing for development under the leadership of Jamaica, etc… So, I am very used to using the talent, wisdom, and guidance from CARICOM countries.

When I was running as a candidate for the presidency of the general assembly, I said my closest partners, working partners would be the CARICOM countries. And I did that. I worked for the big and the small, for everybody. I had a very close connection and a working relationship with Belize because it’s the chair of AOSIS, and on many issues, but basically touching on climate disasters, agenda financing, financing for development cooperation, capacity building, etc…

I have had a professional life very close to the needs, to the claims and to the contributions of Caribbean countries. I want to bring this wealth of experience, this learning experience to the OAS. And of course, I proved that I can be an impartial bridge builder. I deed that with 193 countries at the UN; and I am sure that I can bring the same experience, the same impartiality, the same capacity to listen, to include everybody into an OAS that for sure, needs refurbishing, needs to be renewed, needs to be connected to the challenges and the needs of the 21st century.

That’s why I am touring the Caribbean. I am listening to Caribbean leaders – what are their expectations, their vision of OAS, that would deliver for them, for their countries and for their people.

An impartial arbiter in disputes and dissent

Janeka Simon: Disputes and dissent are at the forefront in the OAS, particularly on the subject of Venezuela. Given that, should you be elected the next secretary-general; how do you propose to handle this? And, are you comfortable meeting, and officiating at OAS meetings with the representative from Juan Guaido; and do you think that this was an appropriate appointment?

Maria Espinosa: The case of Venezuela is a very good example of how important a secretary-general that is, not an ideologue, an opinionated person, but a neutral, independent, impartial convener. How important that is and; I think we have to remind ourselves who are the governing bodies of the OAS, who take decisions at the OAS.

It’s the general assembly and the permanent council of the OAS, the member states. In any multilateral system, the voice of authority and the governance and the decisions are taken by the members. A secretary-general should be more a secretary and less of a general in-a- away. This is something that we learned and that I have watched closely as well. So, regardless of a particular position of the secretary-general, I think the voice of authority has to come from these two bodies.

The general assembly and the permanent council, that’s perhaps when the problems started to arise. Consultation, constant dialogue, interaction – the secretary-general should be a leader, an implementer, a listener, but also an adviser to member States. The role of the secretary-general is to advise member States with impartial and technical high-quality information for them to decide. And once the decision is taken, to deliver and implement; and also, to come up with early warnings on certain circumstances and issues.

Regarding the particular situation of Venezuela, there are several resolutions that have been voted and decisions that have been made and there is a need for wisdom and impartiality on these decisions and I think that you have to play with the elements you have in a very respectful way, with the rule of law, and procedures.

I was the president of the general assembly and not once, any country big or small, question my rulings. This is simply because they were connected strictly to international law and the rules of procedure. It is extremely important – the forms, as we say, – are very important, not only the content but the way you deal with these issues.

In the particular case of Venezuela, I think that we need a fresh look. That of course, to respect all the decisions that have been taken. We cannot repeat, using the same strategy and expect a different outcome altogether. So, we really need some oxygen, some pause, some assessment of what has happened. And I think that you can deal with the Venezuela issue, but not expect that Venezuela would take all the political energy of the organization. It has been very divisive, polarizing, not only within the Caribbean; it has been polarizing in the entire hemisphere, in the world … there are different positions on the Venezuela situation.

But it is true that we have to look at the 34 Member States. Every member state faces particular challenges. They have their priorities, their vision. They want the OAS to respond to their needs and, I think we need to recover the spirit of the OAS and the founding charter, the four pillars of the work to interconnect democracy, development, security and human rights. Bring them together, rethink and reassess the more than 2,000 mandates of the Organization, see what are and which are not pertinent anymore, what are the new themes that we all face.

For example, let me just pick an example. The climate crisis and what is the role of the OAS to support and accompany countries such as the Caribbean countries that are most vulnerable on this planet and the global conversation [on climate], but also what are the challenges of middle-income countries and CARICOM countries. What are the particular challenges the way we handle debt? The fiscal pressures that we face, the impact of new technologies in the future of work.

The youth are the majority of all of the population of the hemisphere is below 30 years of age. How are we going to produce millions of new jobs for these young professionals and equal opportunities? This is very much connected with a security agenda.

The holistic vision to bring to life the four pillars of the organization to really [also] care about women’s rights and the equality agenda, the rights of persons with disabilities. The Inter-American system has conventions on many issues. We have jurisprudence. We have legal bodies. But we are also facing an implementation crisis.

So we have to be very serious about sharing, understanding and building a vision for the 21st century, and the OAS. For that, we need to take out the dust, really, and build collectively, an organization that is modern, that is efficient, that is transparent, that has financial sustainability; because that’s another problem – and really come up with a refreshed agenda.

I am a very good manager, and furthermore, I am a consensus builder. So, these are some of what I want to put to the service of Member States at the OAS.

To be continued … Part 2 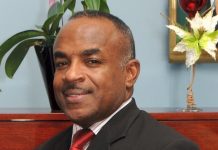 In support of growth and development