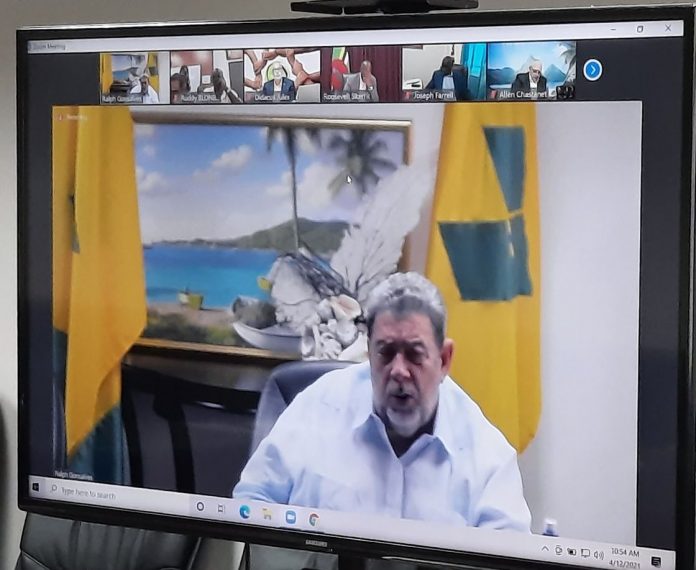 KINGSTOWN, St Vincent — At an emergency meeting, Monday, April 12, 2021, on the situation with the La Soufrière volcano in Saint Vincent and the Grenadines, the OECS Authority, chaired by the prime minister for the Commonwealth of Dominica, Roosevelt Skerrit, reassured the solidarity of the OECS Member States and emphasized the critical needs of the island as well as the ability of Member States of the OECS to assist St Vincent and the Grenadines.

Explosions and accompanying ashfall, of similar or larger magnitude, are likely to continue to occur over the next few days with the chance of PDCs occurring.

On Monday, April 12, the UK announced that “The rapid crisis funds will help provide lifesaving humanitarian supplies like shelter, sanitation kits and protective equipment. Urgently needed technical experts will support relief efforts on the ground, support emergency telecommunications, and restore critical lifeline facilities, like transport links,” in addition “The UK has provided an initial £200,000, via the Foreign, Commonwealth and Development Office to support the regional response, through the Caribbean Disaster Emergency Management Agency (CDEMA), FCDO said in a press release. “The UK will continue to work with the CDEMA and other agencies to assess the need for further support.”

Montserrat’s premier Joseph E. Farrell, said, “Cabinet agreed on a financial contribution of $150,000.00 and members of Cabinet also reviewed the list of items available locally to provide relief to St Vincent and the Grenadines. The logistical arrangements will now be made to send the items to include cots, blankets, water purifying  tablets,  portable water bottles, wheel barrows and push-brooms, to the island.”

Montserrat previously provided technical support before the eruptions began on April 9. Scientists from the Montserrat Volcano Observatory (MVO) joined their colleagues from the UWI Seismic Research Centre in St Vincent to monitor the La Soufriere volcano, in January.

His Excellency Dr Irfaan Ali said that the support for St Vincent and the Grenadines will be continuous. A request was made for black tanks to store water. We have added a lot of food items to that—rice, sugar, beans … cleaning materials, personal protective gear, masks. As it relates to the possibility of offering the option of temporary relocation for distressed persons, president Ali said that there has been no request along that line so far. We are in contact with the Honourary Counsel.

Prime minister of St Kitts and Nevis Dr Timothy Harris has pledge EC$1 million to the people of St Vincent and the Grenadines. The relief pledge includes financial support as well as humanitarian support will provide the following assistance measures:

The World Bank disbursed US$20 million to support the government of Saint Vincent and the Grenadines’ response to the crisis posed by the La Soufrière volcano eruption.

Our hearts are with the people of Saint Vincent and the Grenadines during this crisis,” said Tahseen Sayed, World Bank Country Director for the Caribbean. “We are committed to supporting the response efforts at this critical time when the country faces this new disaster while already managing the social and economic effects of the pandemic.”

Member States of the OECS pledged their support

At the emergency meeting of the OECS Authority, Monday, April 12, prime minister Gonsalves concluded that “in the north, 40 percent of St Vincent and the Grenadines’ agriculture was decimated, and income support, as well as infrastructural recovery, was needed immediately,” OECS media release, continued.

Prime minister Gonsalves confirmed the Caribbean Disaster Emergency Management Agency (CDEMA) had been coordinating with the Development Partners and the United Nations, who would be assisting with the Needs Assessment.

The government of Bolivarian Republic of Venezuela had donated the use of a vessel to collect supplies and other resources along the island chain in the Eastern Caribbean and the vessel was already en route with resource personnel and relief supplies.

Prime minister Gonsalves confirmed the United Nations Secretary-General António Guterres had reached out to him, pledging support through the UN Southern Command and reiterated the need for all assistance to the island to work with the systems in place in St Vincent and the Grenadines.

The government of Saint Vincent and the Grenadines confirmed that there were three official and secure means of collecting cash donations.

Governor of the Eastern Caribbean Central Bank (ECCB), Timothy Antoine confirmed that the Monetary Council would be considering a grant for the island of St Vincent and the Grenadines. The staff of the ECCB had also embarked on an initiative donating mainly water through the National Disaster Agency of St Kitts and Nevis as well as cash donations from the staff which would be matched by the management.

The government of St Vincent and the Grenadines is in the process of establishing an official web platform for the relief effort that would provide information in real-time on the emerging needs and updates when these are met.

Persons willing to contribute to the efforts, especially organizations in the Diaspora, are strongly encouraged to give cash donations and/or to consolidate any materials being sent to avoid congestion at the ports of entry.

In assessing the northern area of St Vincent and the Grenadines after the last explosive eruption, prime minister Gonsalves surmised: “The place is desolate.”

– With a file from OECS