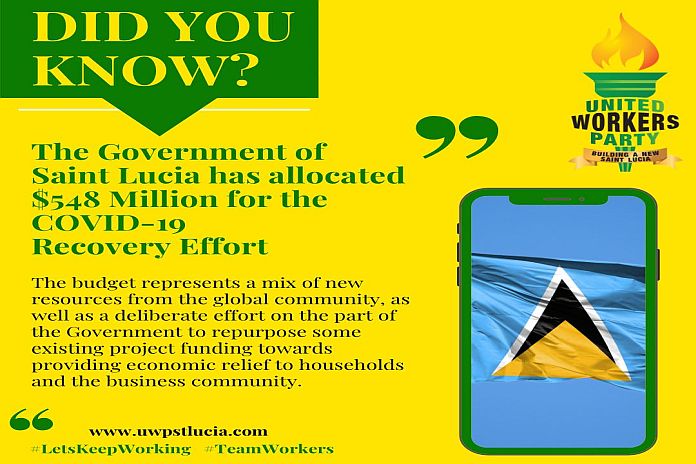 WASHINGTON, USA – Another sitting of the parliament of Saint Lucia, schedule for February 23, 2021, at 10:00 a.m., constitutes infinite borrowing towards a dark economic tunnel of USD$ 37 million, locally termed “Madi Pwete” further concedes to the manoeuvring (acceptable by statutes, with limitations on the timeframe and expenditure levels) to seek an extension for the 2021/22 estimates.

On the advice of the office of the parliament, papers to be laid include:

Fundamental to Tuesday’s sitting is prime minister and minister for finance, economic growth, job creation, external affairs and the public service; and minister for commerce, industry, enterprise development and consumer affairs, will present motions for consideration to borrow US$37 million to supplement the imperceptible “allocation of EC$548 million for the COVID-19 recovery effort.”

According to the government accounting “EC$78 million has been spent on social stabilization,” besides, “pre-covid unemployment was down to 16.8 percent,” and “pre-COVID our debt to GDP ratio was approaching the 60 percent mark.”

The narratives to Tuesdays sitting is fundamental to the political market place heading to the general elections and the mandate of the government that expires July 12, 2021.

The unscrupulous motives that besiege COVID-19 justifications are illogical, except to burden taxpayers, the unborn generation of Saint Lucians, and to force the hands of an incoming administration. Moreover, there is the concept of a Fresh Start by the United Workers Party (UWP) cabal seeking to package their retirement income post-politics.

Inevitable, a new government will be forced to execute a full forensic audit alongside an Inland Revenue audit (and where applicable with the assistance of external security forces) of several government ministries, corporations and individuals.

At present, intelligence sources are said to be monitoring various components on the island not known among the ranks of legitimate Fortune 500 list of companies and individuals, but somehow in a country of 180, 000, people, mid-income status, stricken with poverty and some corrupt politicians, with opportune credence, command cash-flow and substantial asset base on the island and externally in Canada, US, Panama, Chile and Europe. The movement of funds ahead of the general elections has commenced and is well documented.

The disadvantage of the government of Saint Lucia continues to expose know facts – that the 2021/22 budget is difficult to compile figuratively; and to explicitly define in substantive policy relevant to revenue and expenditure to be presented. Bearing in mind that not even with a Bajan consultant to localize the cliche “wave action” relative to the corruption of sand minding/desilting in the community of Piaye, to which Cabinet ministers were caught in conflicting stories, blatant lies and deceit.

Outwardly, the political strategy is to buy time, in keeping with the recently revised date for the general elections, the appointment of specific personnel and others, self-possessed with the ‘State of Emergency’ design to suffocate the Saint Lucia Labour Party (SLP) election campaign.

From what is known in Washington, the UK and Canada, external resources are in place to observe key developments in and out of Saint Lucia, as Cabinet ministers’ have already started cleaning-up work stations, offices and frequented homes in preparation for the unfamiliar, hitherto, on the advise of multiple consultants, that electoral change, not an empowerment card, is on the horizon.

BE IT RESOLVED that Parliament approves an extension of time to lay the Estimates before Parliament, by a new date, no later than fifteen days before the 31st day of March, 2021, due to the impact of COVID-19 on the human resources of the Department of Finance and other Government departments and agencies, involved in the budget preparation process.

BE IT RESOLVED that Parliament authorizes the Minister of Finance to borrow an amount of USD 30,000,000.00 from the International Development Association to finance the COVID-19 Response, Recovery and Resilience Development Policy Programme;

Payara contract review will be undertaken by a team of international...