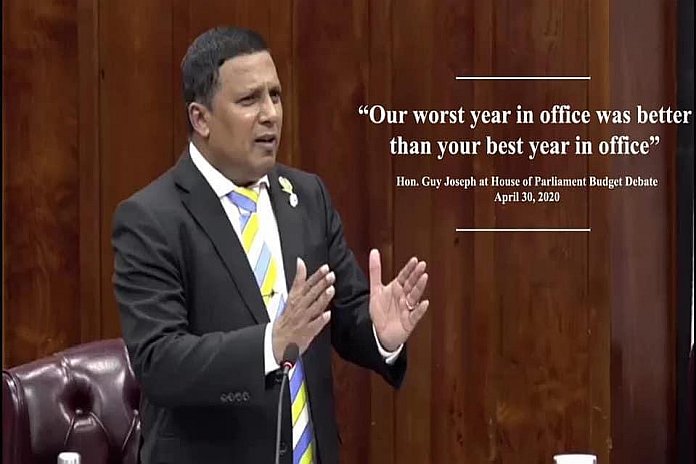 TORONTO, Canada – The minister for finance presented Saint Lucia’s estimates of revenue and expenditure for 2020/2021 in the sum of EC$ 1,697,312,800, albeit lacking pillars of sound economy relevance in a COVID-19 era, substantiates a masked economy of inferior ethos.

The masked economy is substandard to slashing civil servants’ salaries (50 cash/50 bonds); prior to gloating of an “accumulative eleven percent growth” that now represents -18 percent growth blamed on COVID-19. Inexplicably, the government has run out of cash – wallowing the term “ration cash”, lacking creditworthiness to access credible source of funding. 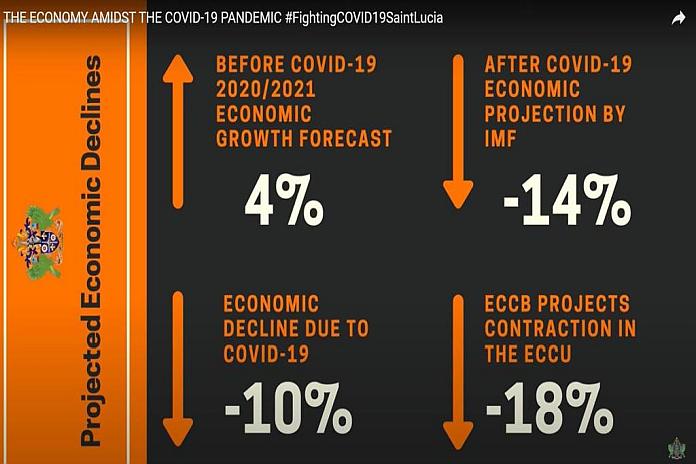 Questions continue to surface whether the economy was on the right track, pivot on tourism, corruption, and nepotism acting as a drag to economic growth – points to the estimates of expenditure for 2018/2019 and the article, St Lucia’s budget expectation vs. facts.

“Any attempt to suggest that my government is gloating or proud and believing that we’ve achieved something colossal with three percent economic growth – No!

Meanwhile, COVID-19 pandemic has shut down the local economy, this has also led some investors to worry about how the government of Saint Lucia will repay bonds that are due. Regardless, the minister for finance optioned to float bonds, that has since been rejected by the trade unions, cooperatives, and the bankers association. 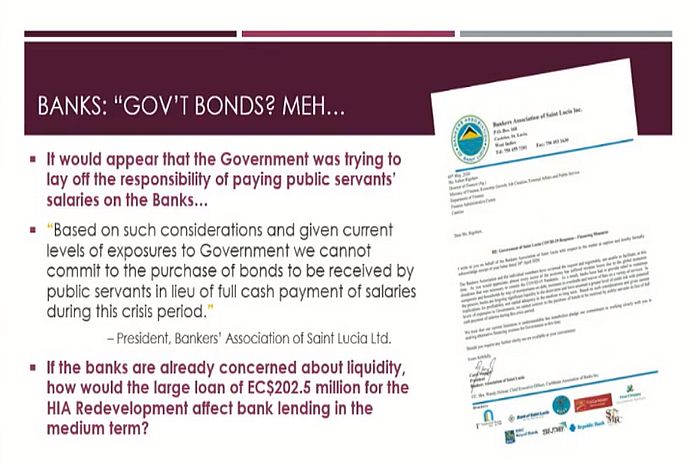 “COVID-19 exposed the mirage of fiscal management. The estimates are as at March 31, COVID-19 had not impacted, yet the government was ‘scranting’ to pay salaries after 3.5 weeks. All the indicators are worse this year than last year and also the projections for last year. Everything is worse, he said. “ The growth is 1.7 percent according to the Social and Economic Review and not 3 or 4 percent as stated by the prime minister and minister for finance,” Pierre pointed out.

According to the forward of the 2020/21 budget summary, “ this document complies with reforms undertaken by the Accountant General’s Department in 2019-20 which resulted in a change, not only in the nomenclature of programmes (in order to better reflect the services delivered by governmental units) but also the reclassification of expenditure in accordance with GFS and IPSAS requirements. 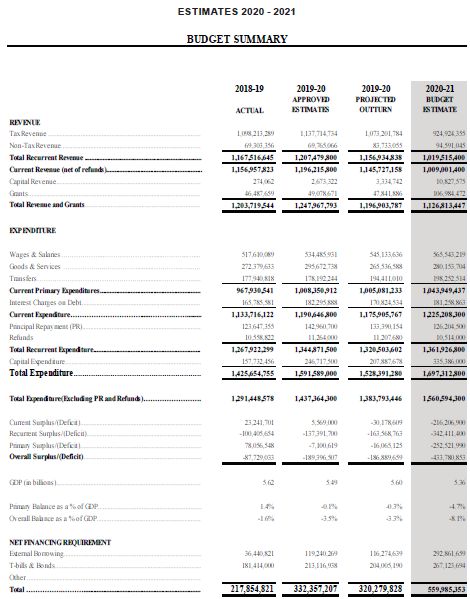 Such is the irony that even alongside the rebasing exercise (that has only reduced the ratio of debt but the volume remains constant) in 2016 and 2020 that accounts for 59 percent GDP improvements, in most sectors, the government has under-performed. Ratio’s increased, the prime deficit is worse, revenue is down, transfers have increased, growth has declined, etc.

Presenting the estimates last year, there were “warnings of significant downside risks to the world economy, including mounting debt levels and increasing inequality and the International Monetary Fund (IMF) projecting a decline in growth this year for 70 percent of the global economy.”

Leader of the opposition, Philip J Pierre, responding to the 2019/20 budget presentation in parliament, said, “I have no confidence in the estimates. No hope in the estimates to change lives in Saint Lucia. This government is living in a world of illusion.”

Returning to the forward of the 2020/21 budget summary, it reads: “The 2020-21 budget estimates have been prepared under very difficult circumstances influenced primarily by the emergence of the COVID-19 pandemic. These conditions are expected to worsened as a result of the adverse shocks created by the COVID pandemic on the world economy including Saint Lucia.

“As a consequence, the 2020-21 budget estimates reflects these realities as government adjusts its spending plans to incorporate both mitigation and recovery plans to deal with the impact of pandemic. Adjustments have been made to revenue projections, project operating, and capital expenditure to create some the fiscal space to enable the government to allocate additional resources to deal with the crisis.”

The forward continues: “Recognizing the significant reduction in revenues anticipated during the fiscal year, departments and agencies are encouraged to continue to embrace the challenges of aligning resource requirements to demonstrated performance results while at the same time doing more with less, as the allocation of resources will necessarily be informed by revenue performance and success in resource mobilization efforts.” 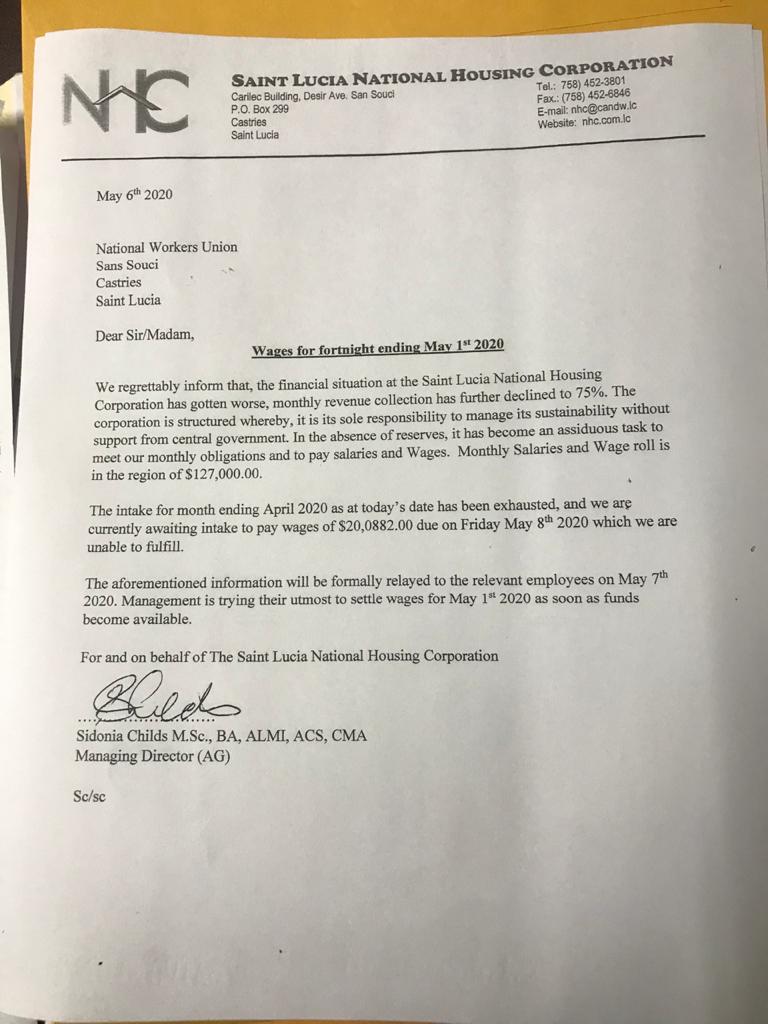 The government of Saint Lucia adolescent approach to ignore well-posted warning signs whines what “daddy didn’t warn about” – the morass of special interests in the public sector.

The funding needs for this year’s masked budget, primary to integrity, local and international is vulnerable to grotesque, policy positions that are deemed unqualified, ineffectual, the consequence of lunacy, and duplicity at the executive level.

The public and international sphere reckoned the incompetence and evidence of delusion, misappropriation, and doublespeak that are at odds to values and principles that reflect, governance, rule of law, and socio-economic fundamentals. This requires an overhaul.

Barbados to host CARICOM conference, UNCTAD and US trade mission