This extraordinary editorial sheds light on education, intelligence, and the politics of COVID-19.

it been an ordinary citizen “illiterate” by the standards of the prime minister of Saint Lucia; and in the absence of the holder of a doctorate, tossing light on the institution which accredited Dr Gale T. C. Rigobert, minister for education, innovation, gender relations, and sustainable development to forcefully say in creole (illustrated in the caption) on a United Workers Party (UWP) platform, “What benefit is there in a laptop”? ~ Dr Gale T. C. Rigobert.

Certainly, COVID-19 has made a wash of that statement, in the light of “physical distancing” and “e-learning”. 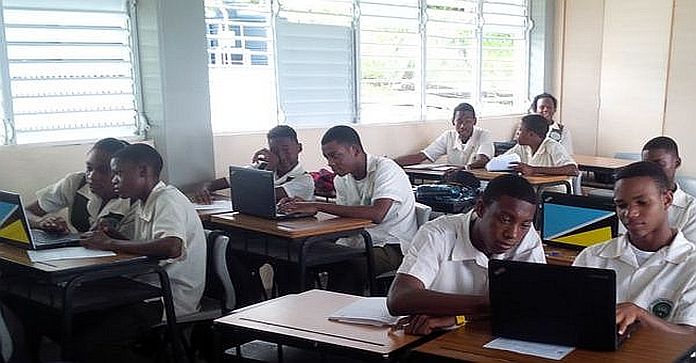 Also, considering that Taiwan donated laptops to Saint Lucia; was it all in vain, a commmentor writes, “Gale should be ashamed of herself and by extension her ‘Ph.D.’ what use is it?”

Arthur Neptune writes, “Folks, I am not spinning anything here, but this is what happens when education, intelligence and politics clash, the end product is a disaster.”

To add insult to injury, upon the UWP assuming office in 2016 the Allen Chastanet – led administration discontinued the laptop programme initiated by the Saint Lucia Labour Party.

“The government of Saint Lucia has announced that there is a partial opening of schools tomorrow, April 20, 2020, but not a physical opening, I take that to mean that there will be teaching but through virtual means.

In short, children and teachers will need devices – tablets or laptops to receive their instructions. Announcements have been made for teachers to prepare to teach and students to be available for online messages.

While this may sound noble, forward-thinking and progressive, and makes for great UWP propaganda and public relations, I ask the question: How many children will be able to access these lessons because of either the lack of computers or access to the internet?

“I think it is necessary to recap where our country was regarding computers for students when the SLP was voted out in June 2016.

The third set comprising of 4,000 laptops, 1500 desktops, 600 projectors distributed in form three. The desktops and projectors were made available to individual schools.

As part of the distribution, teachers were given access to computers or laptops. The SLP government from 2013 began the process of teacher training from the Organisation of American States (OAS) and other online platforms.

In dealing with the question of accessibility we negotiated with the government of Taiwan for islandwide accessibility through the G-net program. It is clear that the SLP government had devised a well-structured plan which would in the short run allow students to complete their SBA and CXC examinations virtually or online.

As was the practice at that time the UWP and their surrogates found all imagined and real criticisms to level at the program, including the now infamous words: “’people cannot eat laptops’. In fact, both the current minister of education and the prime minister were scathing in their attacks on the ‘one computer per child initiative’ of the SLP.

“My parents always taught me that patience is a virtue and God works “in mysterious ways. His wonders never cease.” We have come full circle and look at where we are: hundreds of children may be denied access to learning at this time.

I can hear the screams of justification and excuses: “It’s because of COVID 19 and stop criticizing let’s work together it’s a national effort.”

True and logical as this may sound for UWP public relations and social media soundbites, the real truth is that some of our children, particularly those from low income and unemployed households, will not be able to receive online instructions due to UWP neglect and the desire to fight and stop the work started by the SLP government.

I can assure you that there are many more examples of that vindictive UWP posture. I guess all misdeeds and policy failures will be blamed on COVID 19 as if that virus was there from June 6, 2016.”