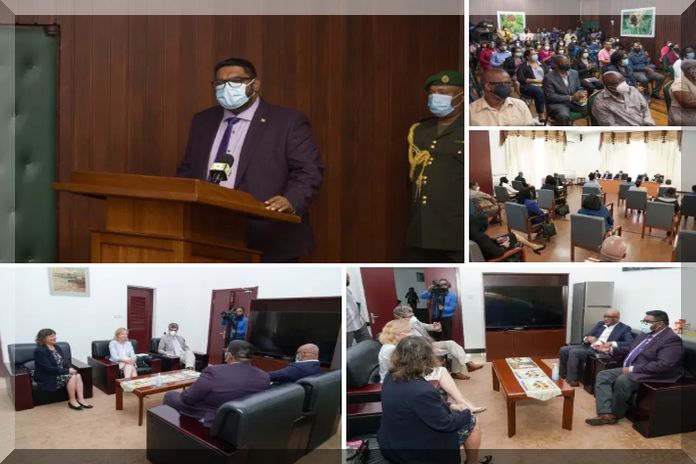 GEORGETOWN, Guyana – His Excellency Mohammed Irfaan Ali, president of the Cooperative Republic of Guyana, stated that he hoped to appoint his cabinet ministers and establish government ministries by the end of the week, speaking with staff, and attending to courtesy visits on Monday, August 3, 2020, mere hours after being sworn-in.

Guyana’s new president sworn-in: ‘Building our Guyana in the interest of all’

“Before the end of this week, we hope to have all the ministries established with the Cabinet ministers appointed, the areas of responsibilities will have to be detailed and gazetted and then we can move towards a more general and broad discussion in relation to the priorities and the focus of the new government,” he said.

The president noted that this was all being done for every Guyanese “So we’re in this together for a better Guyana.”

Stating that the ministry of the presidency is the highest office in the country and that it should have the highest level of service at the highest standard, president Ali urged his staff to work as a team and behave in a manner befitting of the office.

“It is not only the president that makes this environment successful, I’m fully aware of this. I’ve always been a strong believer in teamwork. I’ve always been a strong believer in collective thinking, so I expect all of you to recognise that we have to operate at the highest standard, (in) the most efficient way, and we have to set the bar for the rest of the public service and the rest of the country,” he urged.

President Ali stated that while changes will come, as is common with a transition, plans must result in the ultimate benefit of all the Guyanese people.

He also made it clear that nothing will be done to fuel insecurities or distrust since this can lead to disunity. “That is not the way we should operate,” president Ali stated.